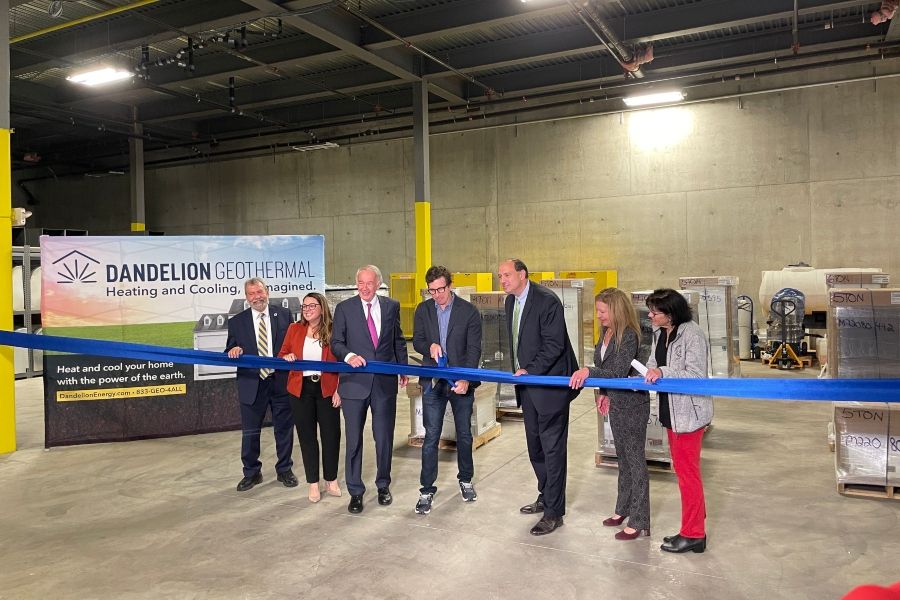 The ribbon-cutting ceremony brought together politicians, industry professionals and many local advocates to welcome Dandelion Energy to the state.

Dandelion Energy Opens New Base of Operations in Massachusetts

The geothermal company continues its growth among northeastern markets for ecological heating and cooling.
Words by: Nick Boever • Photos by: Courtesy of Dandelion Energy

The ribbon-cutting ceremony brought together politicians, industry professionals and many local advocates to welcome Dandelion Energy to the state.

Dandelion Energy Opens New Base of Operations in Massachusetts

The geothermal company continues its growth among northeastern markets for ecological heating and cooling.
Words by: Nick Boever • Photos by: Courtesy of Dandelion Energy

Dandelion Energy has officially expanded into Massachusetts with the opening of a new base of operations in the city of Marlborough. A ribbon-cutting ceremony on Tuesday marked the opening, bringing the company’s geothermal heating and cooling solutions to the residents of Massachusetts.

Prior to the opening, the news of Dandelion’s arrival was met with tremendous enthusiasm from homeowners, with over 7,000 residents entering their information into the online portal and over 100 signing up for a geothermal installation. The ceremony itself found no shortage of excitement either, as industry representatives and local politicians alike joined to welcome the company to the commonwealth.

Prior to the opening of this facility, Dandelion had been servicing Massachusetts through its Albany location, but now, the move represents a commitment not just to the Massachusetts market, but to the progression of geothermal heat pumps. Michael Sachse, CEO, Dandelion Energy, stated himself that with the growth of Dandelion Energy in the eastern market, the goal now is to make geothermal heating and cooling more widely accessible for the benefit of homeowners and the planet.

Notable attendees at the event also included Massachusetts Senator Ed Markey and Representative Lori Trahan, who both recently helped pass both the Bi-Partisan Infrastructure Bill and the Inflation Reduction Act (IRA), both pieces of legislation aimed at transitioning the built environment away from fossil fuels. Markey himself noted the continued growth of greener solutions across the state as a sign of the changing industry.

Representatives from Eversource and National Grid also noted this progression while pledging their partnership with local agencies to further aid in lowering the cost of a retrofit installation. Given the older nature of many homes throughout the New England area, retrofits will likely account for a large portion of the projects Dandelion will engage in, and as such, the company is preparing accordingly.

Through education and outreach, the company has already begun to offer insight to both homeowners and industry professionals alike who are either unaware of or looking to learn more about geothermal heat pumps as an option. Despite having existed since the 1940s, geothermal heat pump technology has only recently entered general consciousness due to legislative focus placed on the systems for decarbonization efforts.

Aside from the IRA, states such as California and New York have been greatly pushing for the removal of fossil fuels in buildings, however, there is still a considerable amount of work to be done on that front. Outside of availability and affordability, knowledge of these solutions among building professionals remains relatively low, with recent polls in California finding that only 5% of all state architects are aware of what the technology can do.

This, the gathered officials at the ceremony noted, presented not just a mandate among manufacturers for better education into alternative options, but also a tremendous opportunity among building professionals to offer safer, more efficient heating and cooling options to their clients.