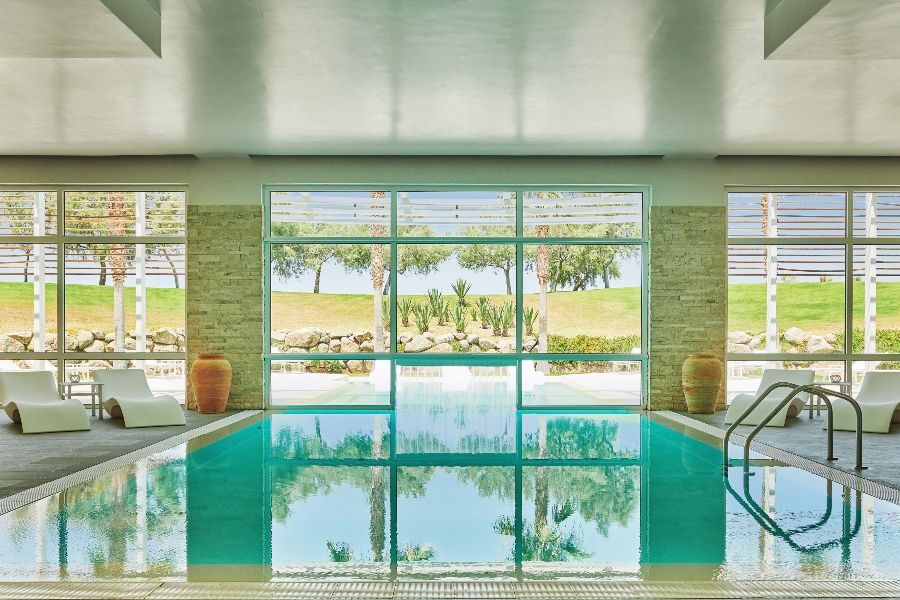 The Verona-based studio reflects on its past a looks towards total wellness immersion for its future.
Words by: Nick Boever, Editor • Photos by: Eric Culliver

The Verona-based studio reflects on its past a looks towards total wellness immersion for its future.
Words by: Nick Boever, Editor • Photos by: Eric Culliver

“Since 1997 I have been working in a niche sector in the world of design“ says Alberto Apostoli, reflecting on his firm’s history as it celeberates its 25th anniversary. The ‘niche sector’ he is referring to? It’s that of wellness, in which Studio Apostoli has worked as a multidisciplinary practice.

Since its inception, the studio has delved into architecture, interior design, engineering, project management and strategic marketing consultancy for the success of Spas, as well as driving the founding, researching and promoting of associations dedicated to new legislative or certification methods related to the sector.

The studio has even had a hand in creating key industry and product design trends, obtaining patents and creating its own products, as was the case with ‘Sasha’, a Spa created for Jacuzzi in 2010 which remains an integral product for the American multinational, promoting wellness as a “widespread, democratic” concept that is now also accessible in the private and domestic sphere.

In that time Apostoli himself has collected over 50 international awards, penning books and designing projects that span China to the America.

“A lot has changed in the last 25 years and the wellness world has experienced exponential growth that other sectors have not experienced to the same extent. Today, everyone is looking for wellness, and they’re looking for it everywhere; it wasn’t like that before – it’s become a lifestyle. When I approached this area, I found a blank slate on which I could build a great deal: first a philosophy, then projects and then products that would be able to meet specific needs or even anticipate them”, says Apostoli.

Exploring the Growth of Wellness Throughout the World

Today, Apostoli stands with a diverse team of professionals in his studio, some of whom act as respresentatives for the diverse cultural markets his studio engages with. In particular, those with a dedicated focus in the areas of Oceania and North and Central America.

Indeed, it was within this key area where a partnership was forged by the studio with Virtu Resorts & Residences for the design of state-of-the-art Medical SPA complexes in Mexico, Canada and Europe.

In North America, the studio has been commissioned to design a Spa within the prestigious Silo Ridge Field Club, a facility making up part of a group of world leading, ultra-luxury facilities, taking Studio Apostoli directly to New York State in the next two years. In Uruguay, the Punta del Este Spa in the soon-to-open Casa Cipriani will promote a bespoke format where the “medical” Spa concept will be the predominant feature.

“Never as in recent years has wellness defined and articulated multiform scenarios and we are witnessing a real segmentation of the offering, which should lead to extremely profiled and successful structures, if properly managed and designed,” Apostoli states.

“In addition to the classic theme of ‘relaxation’, there is in fact a revival of thermalism (or hot spring therapeutics) and a push towards the ‘medical’ sector, an industry naturally linked to hospitality that could reach truly significant business revenue and customer figures in the coming decades.”

Guiding the Interplay of Hospitality and Medicine

The merging and interplay between wellness and hospitality defines the path of the Studio, which today deals with the theme of hospitality in a global manner. After the award-winning interior and wellness design project of the entire Lefay Resort & SPA Dolomiti, the team is now looking to replicate that success in its other projects. All the while, the team continues to design other accommodation centres in different regions of Italy

Apostoli, who speaks as an opinion leader at international events and conferences on the various stages of the sector’s growth, Additionally a founding and promoting partner of associations such as The Sustainable SPA Association, a green an industry association founded in 2020, Apostoli hopes to guide future facilities down a greener path.

Some of the initiatives it supports include energy savings and reduced use of water in Spa design.The association also promotes strategies and beauty products that respect both the enviornment and the individual.

“Taking on hotel interiors and becoming the reference architect for all its various dimensions is now becoming the natural culmination of our 25 years of work,” comments Apostoli”

“It is an ever more stimulating series of challenges that leads me to apply the holistic and wellness philosophy in an increasingly pervasive and conscious way, from the private to the collective, from minor details to the macro scale. And on the subject of large scale, I am realising a dream long stowed in the drawer: to create an ideal place where creativity, architecture and design can lead everyone to joyous bliss and total well-being.”