Alberto Apostoli, founder of Studio Apostoli, an architecture, engineering and interior and product design practice based in San Giovanni Lupatoto, Italy, is a pioneer in the emerging arena of healthcare and hospitality hybrids. For some travelers, the improvement of their bodies, minds and spirits has become their motivation for taking holidays. Demand is increasing for destinations where the primary focus is medical treatments, with the healing process supported by resort and wellness facilities.

Customarily, spas have been entwined with non-Western healthcare treatments such as acupuncture, but in recent years, spa operators and guests have grown more open to the integration of Western medicine.

“All of us hate to go to the hospital, and everybody likes to go to a spa, but they are providing the same services – to heal people,” says Apostoli. The challenge, he says, is that the scientific methods of Western medicine offer evidence and speed, whereas non-Western practices take longer to see results and there’s less research into their effectiveness. However, the combination of the two offers intriguing possibilities, and while their integration is just an emerging trend, he believes it’s absolutely the future.

Adopting a Universal Approach to Design

Offering hotel accommodation alongside medical facilities can make healthcare services more attractive, because hospitality destinations know how to host people, not just patients. According to Apostoli, sleeping well is a way to cure disease, so big hotel brands would be smart to work with medical consultants who can advise about optimal lighting and mattresses for restful environments, given that insomnia can lead to car accidents, stress and depression. He believes wellness hotels need to improve two primary criteria: air quality and bathrooms.

“There are a lot of bathroom products, technologies and universal design approaches that are helpful for disabled people, but at the same time, would be good for everyone,” he says. Materials have the added task of promoting guests’ healthiness without sacrificing aesthetics.

One solution is oversized porcelain tiles that eliminate or at least minimize grout lines where bacteria hides; another is the use of luxurious fabrics conventionally used for naval projects because they are easily cleaned and resist moisture. “We take a lot of inspiration from yacht design,” says Apostoli. “It’s an innovative sector with lots of R&D, plus it’s a luxury business so it guarantees high-quality performance.” 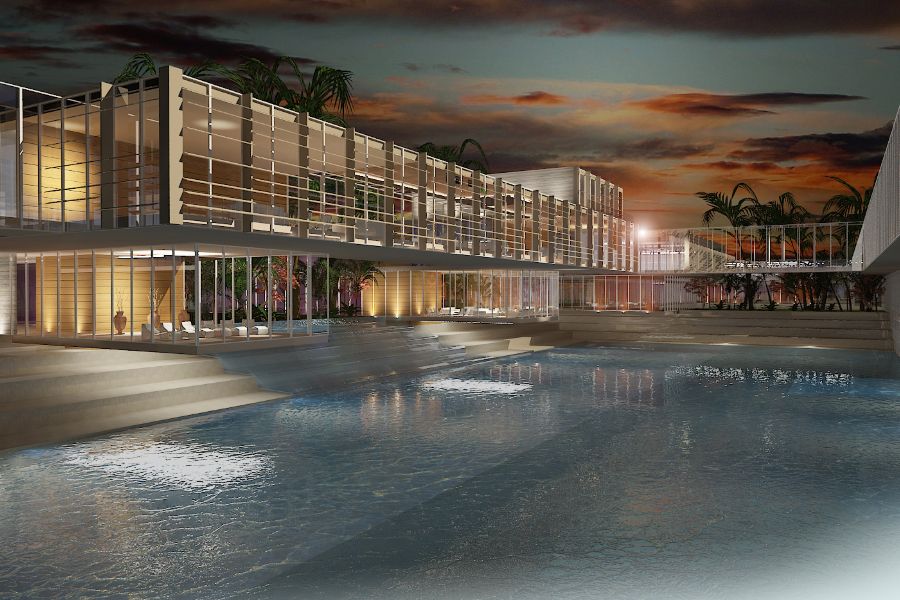 While biophilic connections that promote healing play an important role in all Studio Apostoli’s work, the use of water as a unifying theme will be especially prevalent at Aqua Regalis in Kuwait, a resort and medical spa currently being designed. To soften the “cold, clinical” feel of high-tech medical settings, the modern concept mixes Italian sensibilities for volume and proportion with Taoist-inspired materials of wood, iron and water. Water runs alongside corridors, and a rectangular pool spreads across two above-ground floors and one underground level, simultaneously providing restorative qualities and passive cooling.

The wellness center is divided into six “islands” for treating six different pathologies, with spa treatments accompanied by real medical services, mainly for aesthetic benefits, as well as rehabilitation following sports injuries. The spa and resort are supported by an onsite laboratory and residences.

On the Frontier of a New Lifestyle 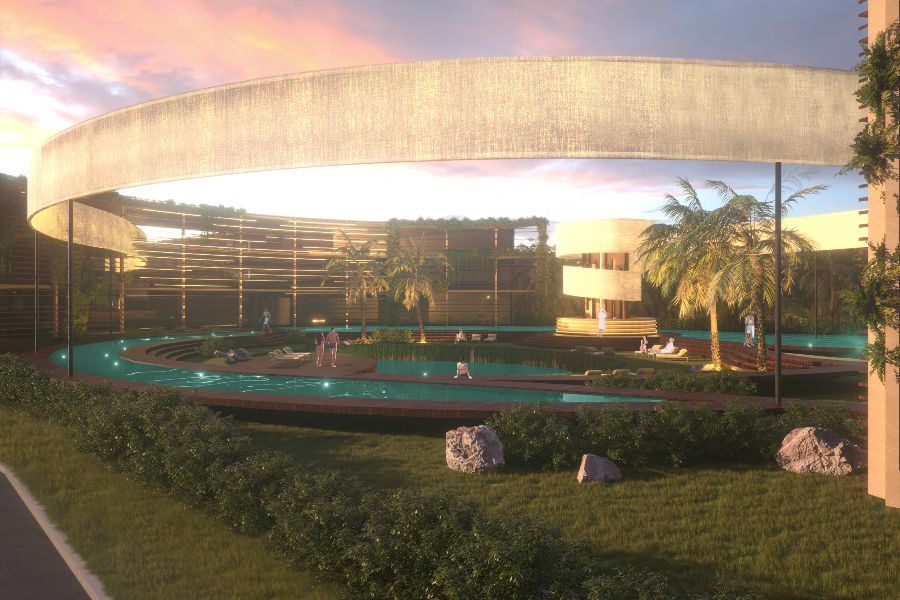 Another of the studio’s forward-looking projects is VIRTU Resorts and Residences, a CBD medical wellness destination being developed by Canadian wellness advocate Sandi Lesueur. The flagship will launch in British Columbia, Canada in the next year or so, with rollouts in Tulum, Mexico and Bračh, Croatia already planned. Treatments will incorporate medicines and CBD tailored to each guest’s needs, with the legacy and rituals of First Nation indigenous inhabitants woven into the services and design.

The project is supported by the UK-based Sustainable Spa Association, as environmentally responsible practices are at its core. Apostoli’s architectural designs are conceived to facilitate VIRTU‘s goal of becoming the first “Net-Zero Resort” with a zero-waste policy, all while maintaining a high degree of luxury. He is currently exploring processes for as much as 80% of the structure to be built off-site to minimize the impact of construction upon the natural surroundings and the native culture.

“I really want to create wellness for people through architecture that relaxes us and impacts us physically, mentally and spiritually,” says Apostoli.

“We need to fight the fear of hospitals, and the best way to do that is to create a new environment where you are treated as a patient from a scientific point-of-view, and as a guest from a human point-of view. Whoever is able to combine the capacity of hosting and curing people in the same project, and in the same environment, will rock the market. It really is the frontier of a new lifestyle.” 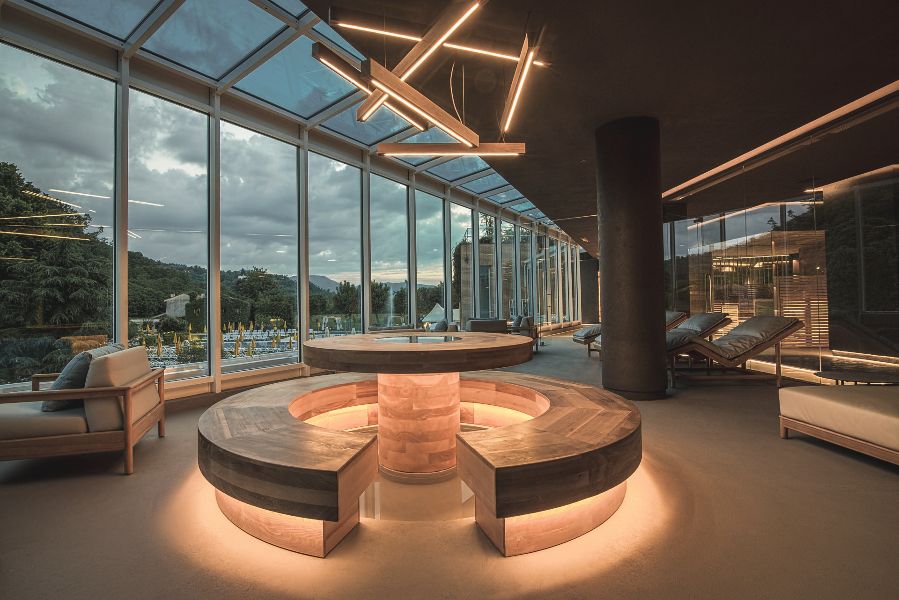 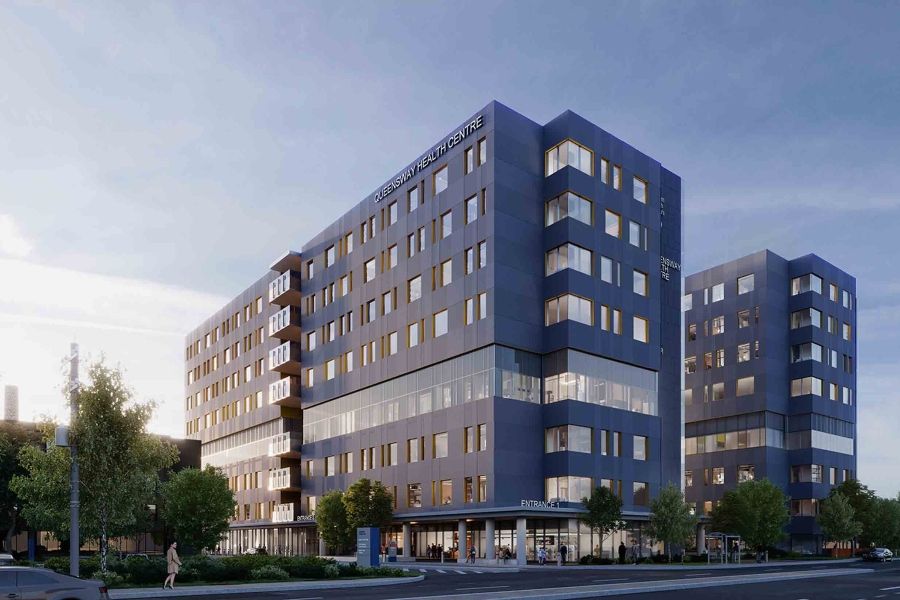 A Distinct Floorplate Maximizes Views and Mobility at Queensway Health

The forthcoming expansion gives patients and the public ample access to natural resources for healing. 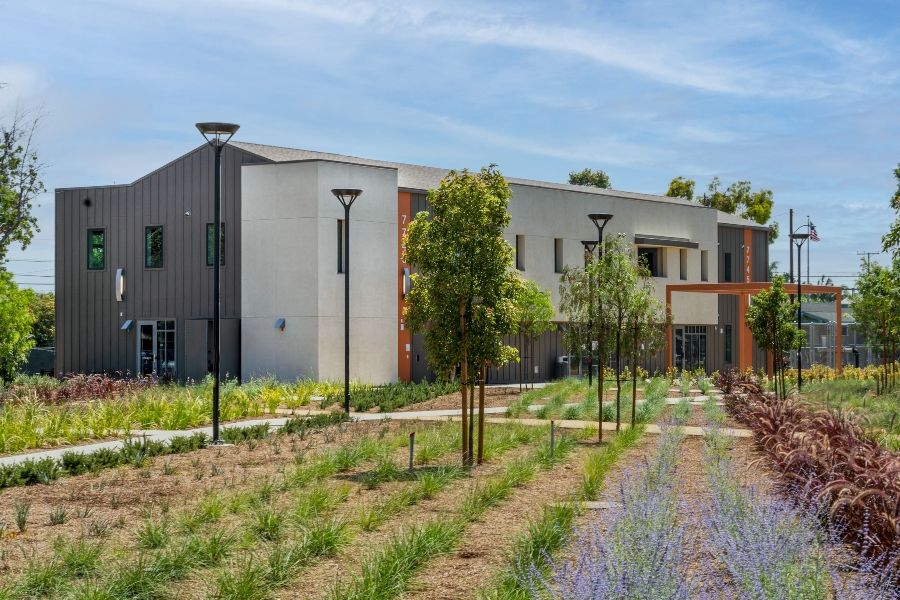 The design of the space was conceived to match with Ranchos Los Amigos’s existing healing ethos. 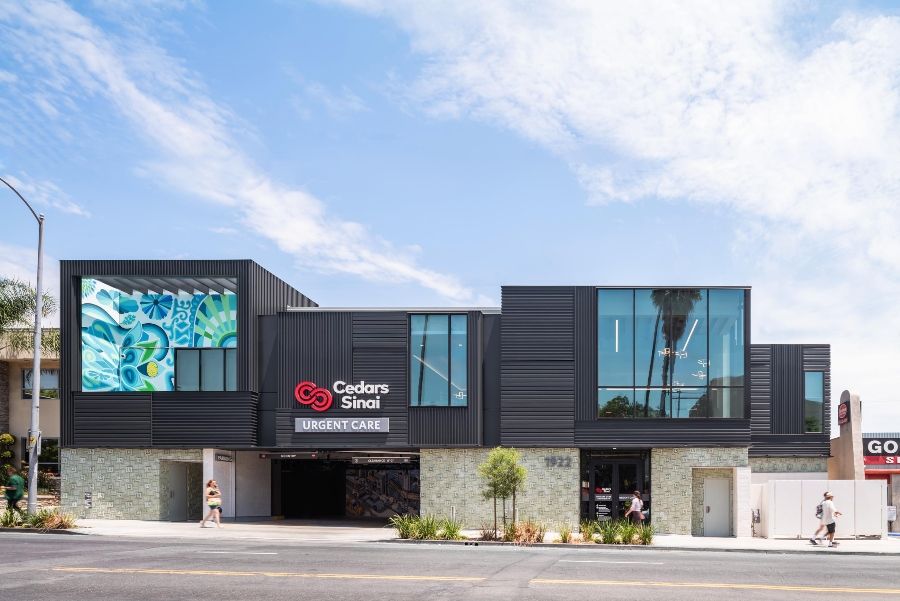 A pastiche of styles help tell the story of a community to provide familiarity and understanding in care. 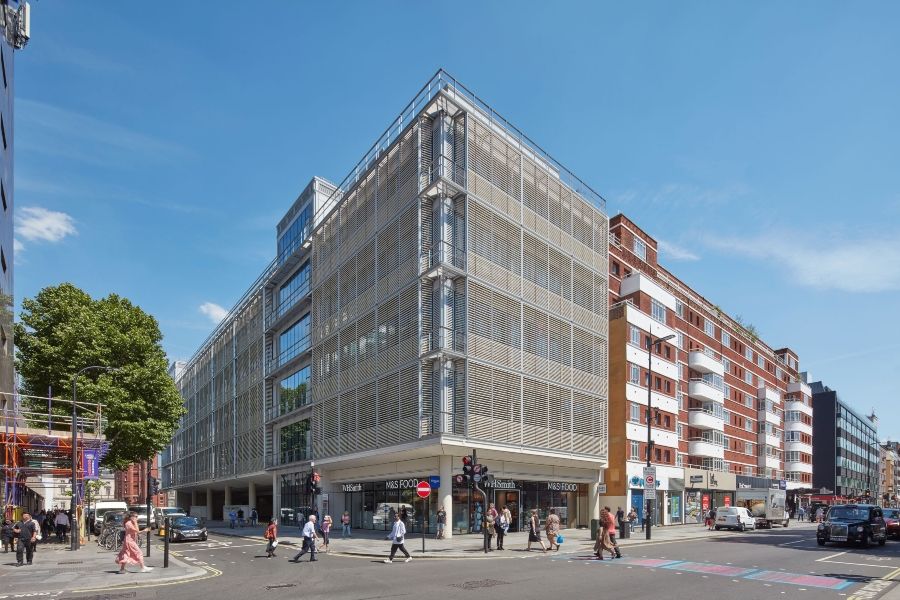 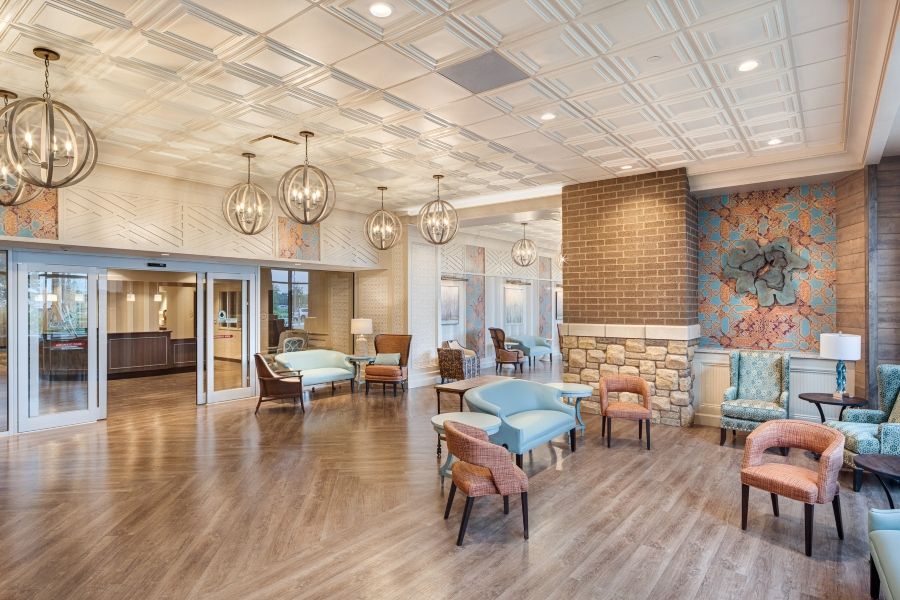 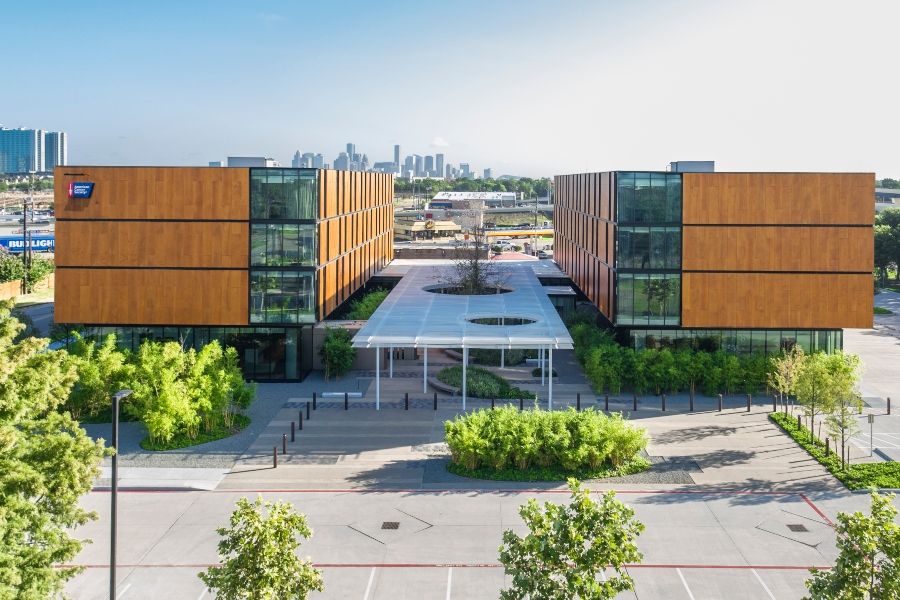