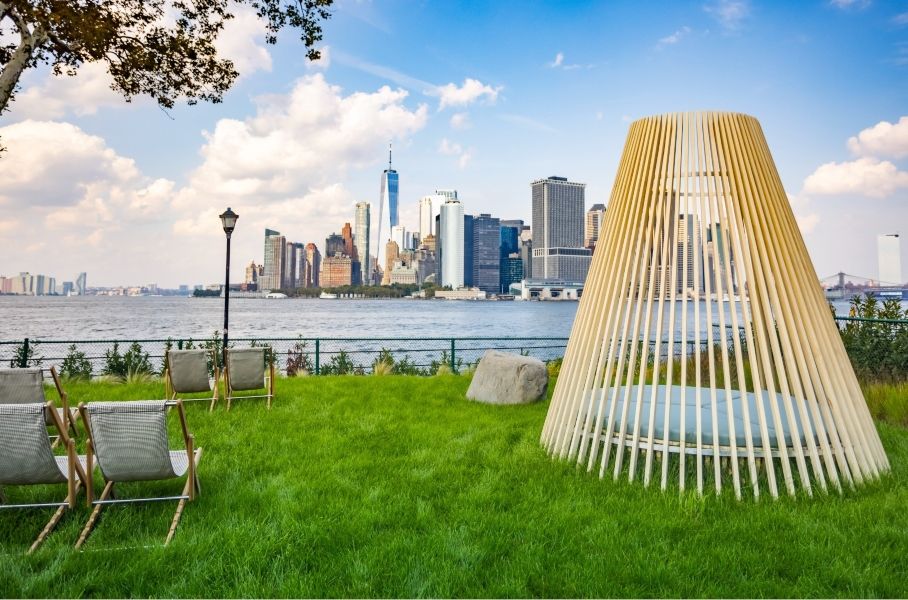 QC NY, a new destination spa resort by QC Terme Spas and Resorts, has opened to much anticipation on the northern tip of Governor’s Island, New York. Spread across three readapted buildings, the New York opening mark’s the spa and wellness brand’s debut in North America, bringing its signature European wellbeing rituals just a ferry trip away from lower Manhattan.

First established in 1982 in Italy, QC Terme Spas and Resorts was originally founded by two brother, Saverio and Andrea Quadrio Curzio. From there, the brand continued to expand from their original location to other area of Italy and France. Today, QC Terme Spas extend to Milan, Rome, Bormio, San Pellegrino, Torino, Dolomiti, Pre Saint Didier, Chamonix and Monte Bianco.

“After years of planning, restoration, and building, we are so proud to bring this enchanting oasis to the city,” Janine DiGioacchino, CEO of QC US, said in a press release. “Now, more than ever, we all need and deserve mental and physical self-care.”

A former military base, Governor’s Island has gradually been built out into a vibrant public space, with QC NY being described as the ‘cherry on top’ to today’s experience, adding to the rich culture and year-round active spaces that open to a landscape of physical and mental wellbeing.

Each building the newly christened spa occupies has been carefully preserved and refurbished with saunas, steam rooms and treatment rooms. In addition, the site also contains several infinity pools to capitalize on the panoramic views of the distant city skyline and vast oceanfront property. The spa itself draws upon the culture of Roman baths, with QC Terme designing each one to be a gathering place for people to relax and linger with others.

As part of the additional treatments, QC Terme will also feature fully customizable massages. Guests will be able to select their own music, techniques and aromatherapies to be used as part of the treatment.