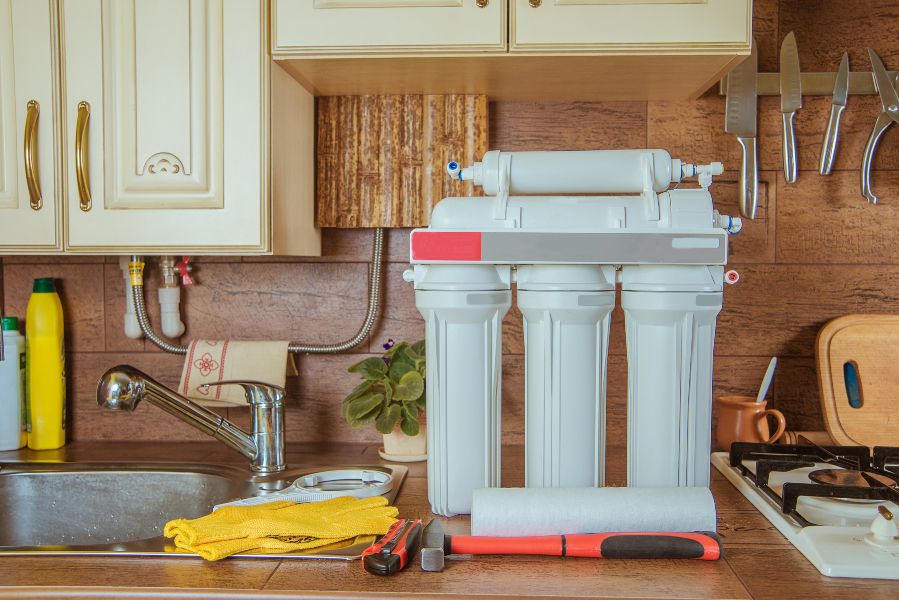 Current reverse osmosis filters often use a tremendous amount of energy to scrub just a small amount of lead.

Ubiquity is years off, but this new process could one day make it into home systems.
Words by: DesignWell staff • Photos by: freepeoplea/stock.adobe.com

Current reverse osmosis filters often use a tremendous amount of energy to scrub just a small amount of lead.

Ubiquity is years off, but this new process could one day make it into home systems.
Words by: DesignWell staff • Photos by: freepeoplea/stock.adobe.com

An all-new way of filtering heavy metals from water could provide quite a shock to home systems in a few years, according to Sci-Tech Daily. Initially based upon findings from six years ago that were used to clean up brackish water before moving on to deal with radioactive contaminants, the latest version of this water filtration technology could prove pivotal in removing lead from water supplies in home environments, in addition to other metallic contaminants from industrial or chemical processes.

“It’s notoriously difficult to remove toxic heavy metal that’s persistent and present in a lot of different water sources,” says Mohammad Alkhadra, a graduate student who worked on the research. “Obviously there are competing methods today that do this function, so it’s a matter of which method can do it at lower cost and more reliably.”

The reason for this is that lead is often found in incredibly low concentrations in water but can still do significant damage even with those lower numbers. Traditional methods are also often incapable of taking a targeted approach, meaning if lead gets filtered, then all beneficial metals (like sodium and magnesium) are filtered out as well. Not to mention the energy expenditure is often very high when compared to what gets removed.

Using electrodialysis, researchers found that they were able to separate up to 95% of all lead from water sources in the lab. The new process works by sending an electric shockwave through an electrically charged, porous material housing the contaminated water. In doing so, the metallic particles are removed from water that is then reintroduced into the supply.

“This makes the process much cheaper,” says professor of chemical engineering at MIT Martin Bazant, “because the electrical energy that you’re putting in to do the separation is really going after the high-value target, which is the lead. You’re not wasting a lot of energy removing the sodium.” Because the lead is present at such low concentration, “there’s not a lot of current involved in removing those ions, so this can be a very cost-effective way.”

There is a catch, however. According to the report, the process is rather limited. So far it has only been tested in smaller lab scenarios with slower flows of water. As Bazant says, being able to scale up to a home environment will take some time, though he expects progress towards that goal to require only a few years for it to be practical in specific systems. He even suggests that the role of scaling up the technology may be better suited for an aspiring start-up, rather than a research lab.

Future Applications in the Home

As part of the research, Bazant and team identified the most salient use for this technology being in a home filtration system. One mentioned use case involved a unit akin a water heater being place in the basement of a home. There, it would slowly process water before collecting it in its own reservoir to be used for drinking and cooking applications while water for showers, toilets and lawns would go unprocessed.

One prominent use case could even be alleviating the situation in Flint, Michigan. In this scenario, filters could clean water as an interim solution as distribution pipes are replaced over the course of several years. He also suggested its use as a more energy efficient alternative to the second step of purification in most desalination plants, where costly reverse osmosis is done twice over for results.

“I think this is an exciting result,” Bazant says, “because it shows that we really can address this important application.”

A full report of the findings can be found in the journal Environmental Science and Technology – Water, written by Huanhuan Tian, Mohammad Alkhadra, and Kameron Conforti, and Martin Bazant.