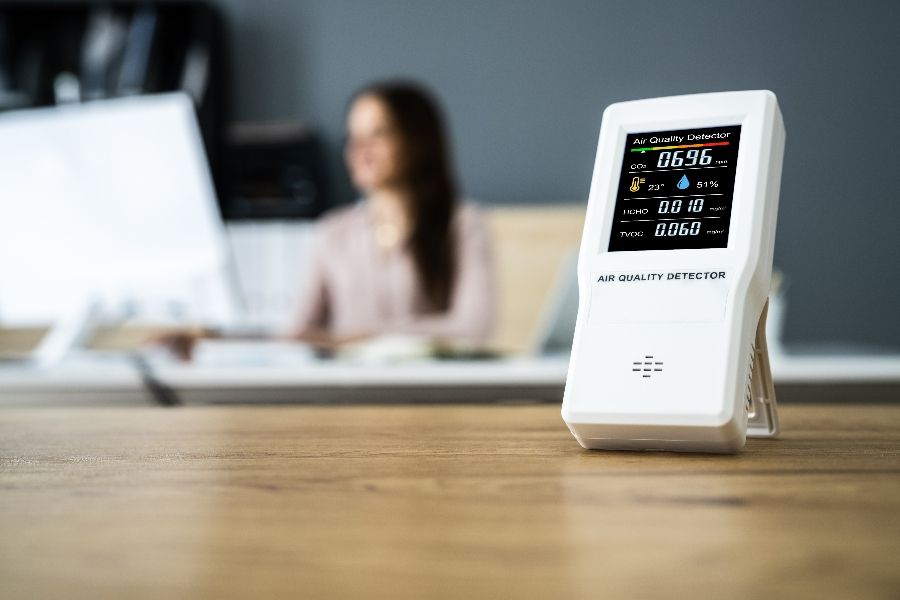 This year’s International Day of Clean Air shows there’s much to do in improving office spaces.
Words by: Nick Boever • Photos by: Andrey Popov/Adobe Stock

This year’s International Day of Clean Air shows there’s much to do in improving office spaces.
Words by: Nick Boever • Photos by: Andrey Popov/Adobe Stock

In observance of this year’s International Day of Clean Air (Sept 7), Fellowes Brands, a family-owned workplace solution company, announced the results of their recent national survey on office air quality. The results are something we’ve been hearing for a while. With indoor air quality (IAQ) so high in the public consciousness, people are more critical of air now than ever. So, it should come as no surprise that only 36% of respondents in the survey felt as though they could describe with workplace air as ‘clean.’

“The results of our survey are clear—most American workers understand the health risks of poor IAQ and the benefits of working in very clean air,” said John Fellowes, fourth-generation CEO of Fellowes Brands. “Businesses that invest in improving their IAQ with air purification, HVAC improvements and increased ventilation will reap rewards with a healthier, happier and more productive workforce at a time of great competition for the best talent.”

What Has Employees Concerned Over Their IAQ?

It’s a well-used fact at this point that Americans spend about 90% of their time indoors, where the air quality can often have two to five times the number of pollutants in it compared to outside. This has only gotten worse over the years due to more efficient building envelopes, with mechanical ventilation a necessity, especially in commercial office buildings.

While a major Harvard study found that poor air quality can severely impair cognition among workers, there are other reasons that employees are concerned about the air. According to the survey, respondents reported as being at least somewhat concerned about the additional consequences of poor IAQ:

Indoor air purification with H13 True HEPA filters can remove 99.95% of particles as small as 0.1 microns, including allergens, such as pollen, dust, pet dander and smoke that can lead to poor IAQ and associated health risks including stroke, lung cancer and respiratory disease to name a few. However, purification is just one piece to the puzzle. 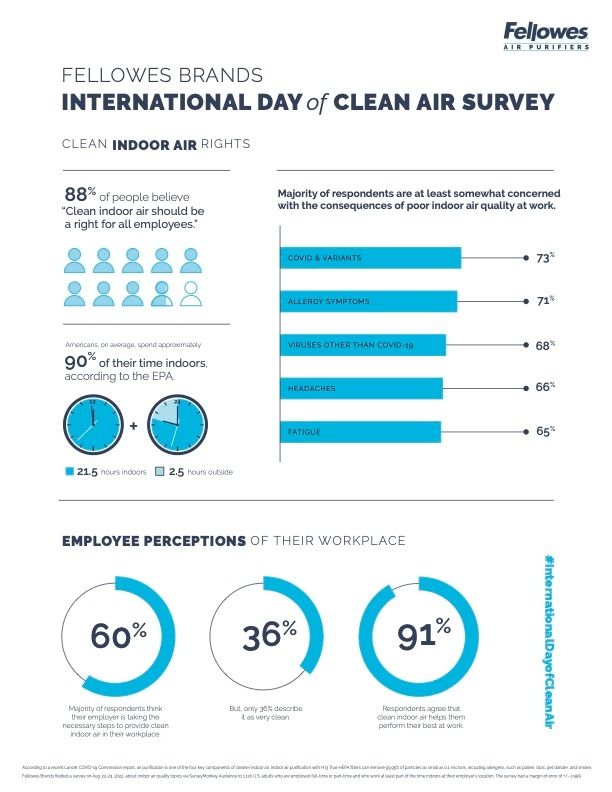 The question may be why after nearly three years of being in a pandemic with increased demands for better air quality, the situation hasn’t improved. One is simple inaction, either due to limited resources or a limited understanding of who is responsible for these decisions. However, another possibility is that people just aren’t aware of the changes being made.

In a separate pilot study done earlier this year in Texas, it was found that compared to commercial offices, home offices often fared worse in terms of air quality, despite respondent perception stating otherwise. In fact, there were instances where commercial offices fared far better than what people were expecting, given the negative perception surrounding them.

Insight into a building’s IAQ is a rarity in most cases, but it is something that has been shown to be valuable, especially in dispelling concerns over the health-rating of its environment. Occupants themselves have requested such. If IAQ is already being tracked on an operations level, that information should be readily available to present in a front facing solution, as readily available as the readings on the thermostat. There are a myriad other reasons to make the push for better air quality tracking in buildings, but that’s for a separate article.

Until we hit that point of transparency in buildings, it might be difficult to determine where the current state of efforts lie. The healthiest materials can be used in the design, the best ventilation and purification systems can be in place, but if occupants and tenants aren’t aware of it, there might still be an element of distrust about the environment. And I think that’s a reasonable assumption to make. In this day and age, with so much to gain about being open and transparent about building health, there’s no other reason not to have air quality data front and center other than if nothing is being done.