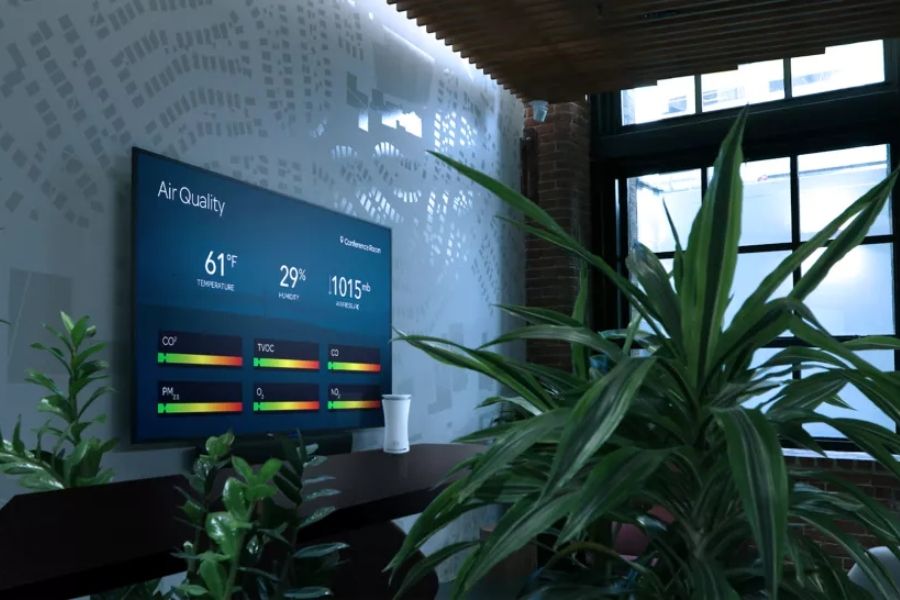 The display on the AQ product is able to give real-time status updates and warnings to building occupants and visitors.

On-site sensors provide the data while the display represents them in easy to understand visualizations.
Words by: Nick Boever • Photos by: Telecine Multimedia

The display on the AQ product is able to give real-time status updates and warnings to building occupants and visitors.

On-site sensors provide the data while the display represents them in easy to understand visualizations.
Words by: Nick Boever • Photos by: Telecine Multimedia

Telecine Multimedia, a media company specializing in digital signage content, has announced the launch of a new product known as AQ or AirQuality. Pulling from building sensors in real-time, the new product provides an automated content feed on displays that showcase the state of indoor air quality across multiple elements, including temperature, humidity, carbon dioxide and particulate levels. This data is also visualized in dynamic charts to show and explain current conditions in simple, at-a-glance graphics.

“We’re offering an additional notification system for workplaces and other venues that can simply, and cost-effectively make people aware of ongoing air quality conditions, as well as threats from gas build-ups and leaks,” said Justin Lachovsky, director of sales and marketing for Telecine. “By utilizing dedicated air sensors and data from existing building systems, we can automatically push real-time status levels and alerts to digital signage displays–letting people inside know about everything from humidity and air pressure conditions to carbon monoxide and ozone levels.”

Since the start of the pandemic, air quality within commercial buildings has become an increasingly valuable topic among occupants, owners and managers alike. A recent study put out by Honeywell stated that 91% of office workers are aware of the issues poor air quality can cause. Another survey by Vaisala confirmed this among general populations, with 65% of American respondents stating they were less likely to enter buildings because of air quality concerns.

“Air quality can directly impact health, so having an accurate, ongoing understanding of current conditions–both outdoors and inside–is important for millions of people, especially those with lung or heart issues,” continued Lachovsky. “Up to date reporting provides an early warning system for people particularly impacted by air quality issues, but more broadly sends a message to building tenants, workers, and guests that they are in a safe, healthy environment and that their health matters.”