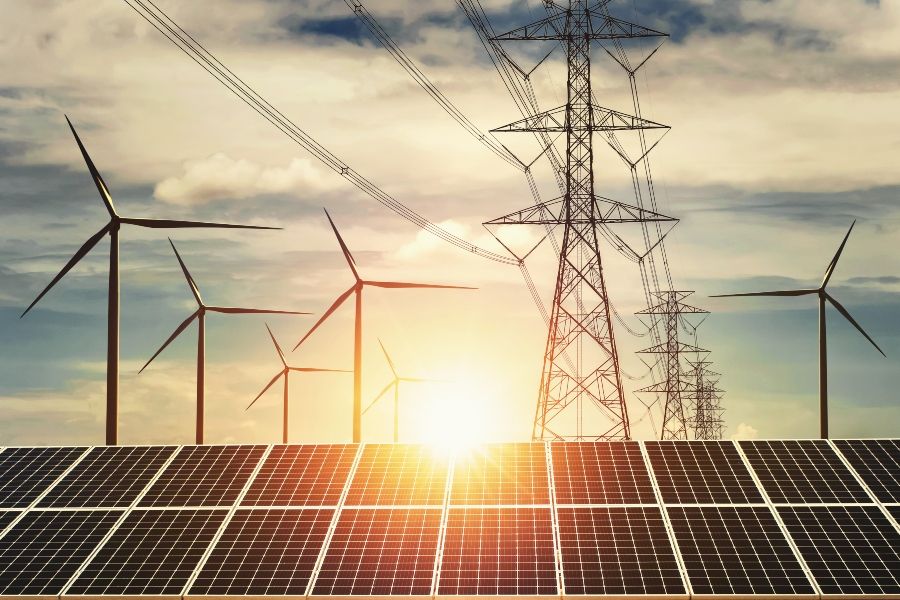 Due to electrification, energy storage and energy generation solutions have been flourishing.
Words by: Nick Boever • Photos by: Lovelyday12/Adobe Stock

Due to electrification, energy storage and energy generation solutions have been flourishing.
Words by: Nick Boever • Photos by: Lovelyday12/Adobe Stock

Since the global pause in the pandemic, CO2 emissions have sharply rebounded to pre-pandemic levels, but that doesn’t mean facilities are sitting idly by, apparently. In its fifteenth annual Energy Efficiency Indicator Survey, Johnson Controls found that spike in emissions has also brought a spike in action, with 62% of respondents in the survey stating they plan on increasing sustainability investments in energy efficiency, renewable energy or smart building technology this year.

“In the face of the multiple and continuous shock waves of the last two years, it is very encouraging to see that building owners and operators are driving forward the kinds of investments that deliver the resilience needed to grow their business and attract and retain the best talent”, said Katie McGinty, vice president & chief sustainability and external relations officer at Johnson Controls.

Global Progress has Accelerated in the Last Five Years, Though Emissions Still Remain a Problem

The latest report by the United Nations Intergovernmental Panel on Climate Change advised that global-scale transformation is urgently needed to combat climate chance. However, the Johnson Controls Energy Efficiency Indicator Survey found that many are still facing challenges to accelerate sustainability efforts in key areas. Almost two-thirds of survey respondents say they struggle to scale sustainability initiatives across buildings, geographies or business units.

Almost half of the respondents surveyed say their top barrier to pursue energy and building technology improvements is either a lack of funding to pay for improvements (25%) or uncertainty in their return-on-investment (23%). Additionally, more than half of respondents pointed to a lack of technology as one of the hindrances to scaling sustainability efforts.

Despite this, planned investment in energy generation or storage has grown significantly over the past five years. More than a third of respondents said they plan to replace fossil fuel heating equipment with heat pump technology in the next year, rising by 7% from the year prior. According to the report, thermal energy storage has also risen from 27% to 42% in the last five years. More than half implemented some form of electric energy storage in the past year.

Organizations also have been rethinking exactly how technology gets used, as well. Following sustainability measures, protecting the health and safety of building occupants was the next most significant driver of technology investments globally. Additionally, 65% of respondents sought out an indoor air quality assessment last year.

Respondents also said improving occupant health and wellness overall and improving life safety and security were important decision-making factors. Over the next 12 months, almost 60% of organizations plan to invest in fire/life safety system and security system improvements to their buildings. Long term, more than two thirds of organizations believe data analytics and cybersecurity will have an extremely or very significant impact on the implementation of smart buildings over the next five years.

The survey also found the United States and Europe to be the standout leaders in green building planning, with U.S. organizations holding the most green building certifications. The U.S. also had the most respondents seeking to pursue net-zero energy or carbon building measures in the next 10 years.

To learn more about the survey findings, visit here.