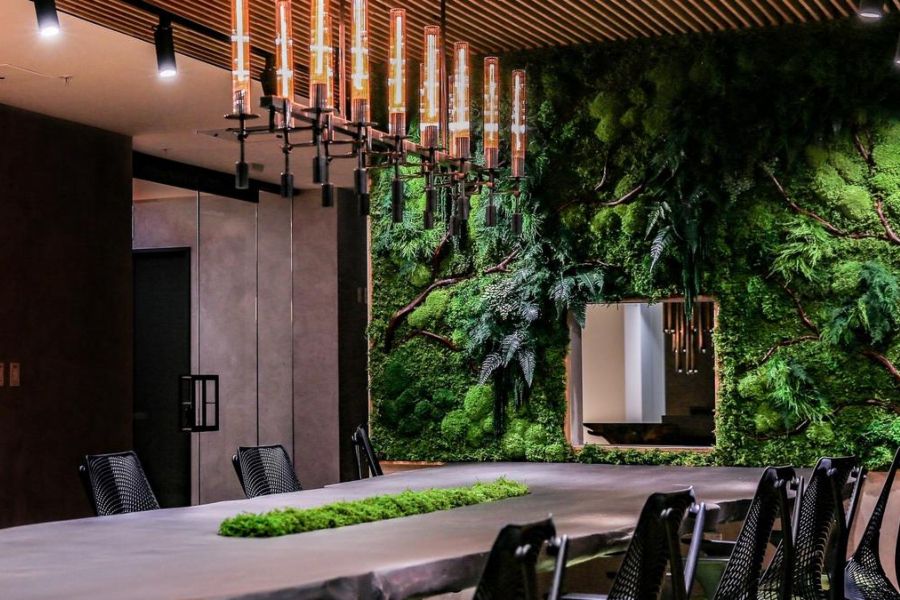 The Ring Shakes Up Co-Working With Wellness-Backed Design

With people spending 60% of their day in an office, Daniels Ikajevs wants that time to be enjoyable.
Words by: Nicholas Boever • Photos by: The Ring

The Ring Shakes Up Co-Working With Wellness-Backed Design

With people spending 60% of their day in an office, Daniels Ikajevs wants that time to be enjoyable.
Words by: Nicholas Boever • Photos by: The Ring

A new co-working space in Clearwater, Florida is taking the concept of a healthy workplace up a notch. The reason is simple: as people return to work after the pandemic, many office spaces are betting that workers would rather spend their days in more health-conscious spaces. And that’s not a bad assumption to make.

Indoor air quality is a huge concern for many people, to the point where it’s impacting their desire to venture out into public spaces. Aside from that, other elements of a space, such as lighting, access to greenery and even sound design have been garnering attention with how they can impact wellbeing.

While not widespread at the moment, commercial set-ups and building owners are making an incredible push to make this idea of a wellness-driven office space more ubiquitous than it currently is, especially considering that while 90% of most people’s time is spent indoors, 60% of that is spent in an office. That’s where The Ring is stepping in.

“Our goal is to be the world’s healthiest co-working space,” says Christopher Murphy, community manager at The Ring, which occupies two floors of an 11-floor building in downtown Clearwater, Florida. “Typically, when you go into any space, what your eyes see [is] what’s considered to be design. We kind of went a step ahead and wanted to create an environment that makes people feel better inside the space.”

With an interior space more reminiscent of a jungle rather than an office at first glance, Murray claims that this has led to the air quality being higher than what would be found in most hospitals. It’s a key function of the biophilic design employed, with living or preserved moss and hanging ferns lining the conference rooms and elevator banks.

Natural wood and cork compliment the warm, living design, with cork serving a dual purpose as a sound absorbent material, keeping the overall chatter throughout the office significantly reduced.

Additionally, the air quality in individual offices is further kept in check by having occupants use trash cans and printers located only in common area. Here, a specialized ventilation system cleans up the air, immediately removing harmful chemicals as they are produced. Daniels Ikajevs, entrepreneur and co-founder of The Ring, is even able to pull up air quality statistics on demand to better control the quality of the space, using Harvard’s proprietary For Health app.

The rooms are also equipped with special lighting designed to reinforce occupants’ circadian rhythms, allowing for greater cognitive function that supplements the gains from better air quality. Massive floor to ceiling windows and glass walled conference areas allow natural sunlight to flood the space. The overhead lights can then be either adjusted to personal preferences or automatically adjust throughout the day based on available light.

An Eminent Focus on Employee Health

It should be no surprise to find out that the co-working space is working to become WELL Certified. The space even offered up its location for a recent Harvard study looking into the effects of indoor air quality on human cognition within a space. However, a considerable amount of effort also went into the sustainability of the building.

For instance, The Ring has banned all single-use plastics on site, in addition to forgoing the use of animal products such as wool or leather. They even went so far as to either work with vendors already known for sustainable practices, while convincing others to adopt more sustainable elements, like switching out plastic knobs on blinds with wooden knobs.

In this way, spaces like The Ring are showcasing simply how valuable it is to have a wellness-driven office space. As companies reevaluate the type and size of office spaces they’ll need in a hybrid work structure, ensuring the overall quality of the space is an absolute must, an opinion voiced by designer Cynthia Townsend, a WELL accredited interior designer in the Tampa Bay area.

“Organizations see a return on their investments through increased employee engagement and productivity,” she said in talks with Axios.

While improvements such as new lighting, a new ventilation system or a reorganization of office spaces can be costly, designers like Townsend say it will pay dividends, not only by giving workers a reason to return to more collaborative environments, but also making them far more productive in the process through healthier design.