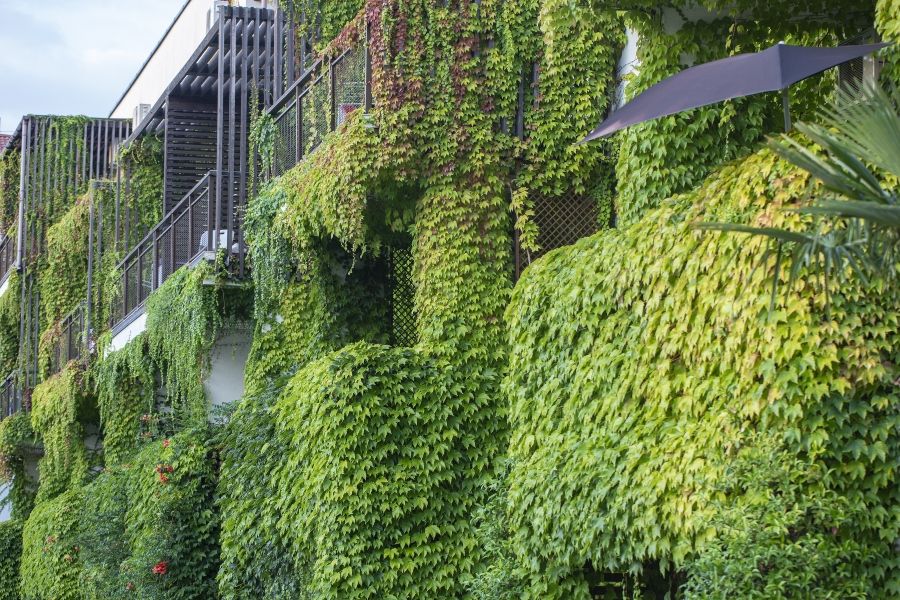 A greener skin on buildings seems to help with temperature regulation, according to the University of Plymouth.
Words by: Nick Boever, Managing Editor • Photos by: Andy Shell/stock.adobe.com

A greener skin on buildings seems to help with temperature regulation, according to the University of Plymouth.
Words by: Nick Boever, Managing Editor • Photos by: Andy Shell/stock.adobe.com

A recent study done by the University of Plymouth reveals that not only are living walls beautiful, but they’re also incredibly functional as well.

The study, which was done independently by the University’s Sustainable Earth Institute, looked at how different types of walls retained heat, using an old campus building at the testing ground. A traditional wall was pitted against a retrofitted living wall that used a “flexible felt fabric sheet system with pockets allowing for soil and planting.” Neither wall was insulated. Both were situated at similar elevations and faced the same direction.

Over the course of five weeks, researchers measured the temperatures of the walls where it was determined that the living wall had lost 31.4% less heat than its traditional counterpart. It was also found that temperature fluctuations during the day were much lower as well.

Good News for Lovers of Greenery

Part of the impetus for the study, as mentioned within, is the sheer lack of information that exists regarding the performance of such structures. While the academics involved stressed the need for repeat investigations to explore how the growth of the wall effects overall performance, these findings seem to bode well for their use as insulative material.

This further spells good news for sustainability efforts when it comes to older buildings. At present, buildings account for around 40% of all energy consumed in the United States, with heating accounting for nearly 60% of all energy used within buildings. By being able to stabilize temperature levels, less energy is required to keep buildings heated.

Additionally, retrofitting a living wall onto an existing wall provides cost-effective efficiencies, while also increasing biodiversity and air quality within an immediate area. The appeal of living walls also lends itself to beautification efforts in specific areas.

The study points to there being benefits for those in warmer climates, as well. According to a previous study cited by the researchers, “By minimizing the solar gains on buildings, green walls have also been found to lower the indoor air temperature of buildings in warm climates through foliage offering shading to the façade.”