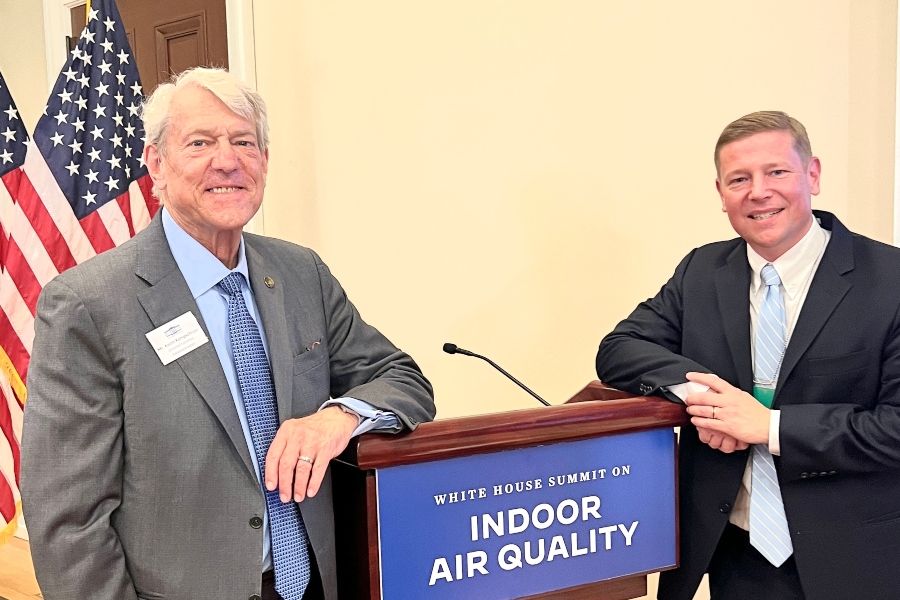 Experts convene to discuss how indoor air quality can become an engine for public health.
Words by: Nick Boever • Photos by: Courtesy of IWBI

Experts convene to discuss how indoor air quality can become an engine for public health.
Words by: Nick Boever • Photos by: Courtesy of IWBI

The Biden administration convened its first ever Summit on Indoor Air Quality (IAQ) last week, building upon the federal government’s ongoing actions towards driving healthy building practices. During the event key leaders, experts and advocates in the field were brought together intent on developing an air quality strategy that could look beyond the context of COVID for its health impact.

Dr. Ashish Jha, who has been leading the White House COVID-19 Response, outlined the public health implications during the opening statements of the summit, comparing air quality to water quality for its ability to impact communities, and setting the tone for the discussions to come.

A Call to Action for Healthier Buildings

Though the name would imply exclusivity on air quality, the scope of the summit talks became more focused on a building’s role in health overall, though air quality remained a prominent feature in those discussions.

“Our buildings have an outsized impact on our health,” said Joseph Allen head of the Healthy Buildings Program and associate professor of exposure assessment science at Harvard University’s School of Public Health. Because humans spend so much time indoors, he asserted, a building or facility manager has greater impact on an individual’s health than their own doctor. He then went on to say that buildings should ‘absolutely’ factor into any public health strategy.

“We know healthy buildings will produce healthy kids,” said Jesus Jara, superintendent of the Clark County School District in Nevada, echoing that same sentiment during a talk on education. With air quality so closely linked to cognition and performance, the conversation surrounding this topic has been perhaps the most passionate, with leaders on all sides pushing for better learning environments.

Such leaders, however, still point to the chronic underfunding of many school districts being the main limiting factor for making necessary improvements. Even with the current administration opening a historic amount of funding through the American Rescue Plan, the underinvestment gap remains too large. Even then, they say: “What happens when ARP [American Rescue Plan] goes away?”

Outside of that, the speakers at the event also highlighted the economic benefits tied to healthier buildings. In his own panel, David Michaels, an epidemiologist and professor at George Washington University School of Public Health, said that the ongoing push for measuring heath, sustainability and equity in buildings is changing the way buildings are valued.

“Investing in healthy buildings is just good business,” added Allen, specifying that it helps mitigate risk while protecting an organization’s people and its assets.

To date, healthy building advocates such as the International Well Building Institute (IWBI)—distributors of the WELL building standard—have applauded the ongoing efforts of the administration, with the results of the summit being no different.

“IAQ is a central pillar of healthy buildings, which is reflected in the WELL Building Standard and how it advances a robust and holistic approach to advancing clean indoor air,” stated IWBI in a press release. “It’s why all of us at the International WELL Building Institute (IWBI), and across our global community, were so excited for this first-ever White House Summit shining a light on IAQ.”

Ultimately, while there yet remains much work to be done, there is a clear appreciation for the current administration’s efforts, as such advocacy has long been absent at a federal level, despite being so crucial in the push for greater change. The federal government, in turn, reaffirmed its commitment by outlining many of the ongoing efforts across its agencies, such as: