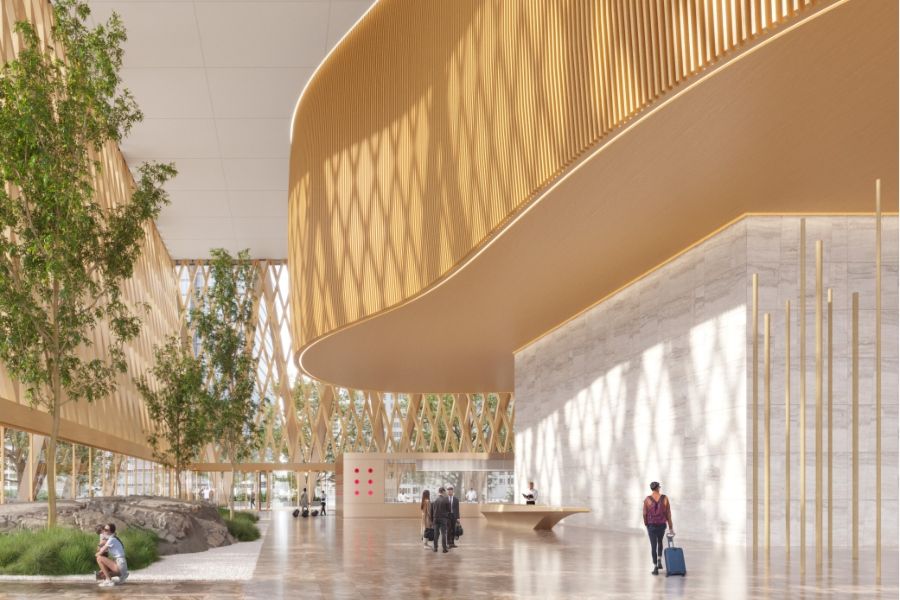 Upon earning its certification, the new hybrid flooring system from DIALOG will be used to create a radical, new 105-story tower.

Craig Applegath talks on how a new type of flooring system breaks the mold for sustainability in commercial buildings.
Words by: Nick Boever • Photos by: DIALOG

Upon earning its certification, the new hybrid flooring system from DIALOG will be used to create a radical, new 105-story tower.

Craig Applegath talks on how a new type of flooring system breaks the mold for sustainability in commercial buildings.
Words by: Nick Boever • Photos by: DIALOG

In the realm of construction and architecture, mass timber, also referred to as cross-laminated timber has become quite the exciting piece of material. For many professionals, it offers a more sustainable option for building, without sacrificing durability (it’s just about as strong as steel in terms of supporting loads). However, the material is not without its limitations.

Since its introduction and subsequent rise in popularity, the material has mostly been relegated to use in residential construction, or in buildings that sit much closer to the ground. As far as seeing as high-rise or skyscraper built out of the stuff, there’s simply no way it can be done with current building technology.

The reason for that, Craig Applegath, Partner and Architect at DIALOG, states, is due to the way most modern commercial buildings are structured. When used in a flooring system, cross laminated timber can only support up to so much square footage, and coincidentally, that area of support falls short of the size most commercial offices are built to. This has led to firms like DIALOG attempting to break the mold on modern day floor systems.

“You can make at the outset about 30-foot span of CLT, cross-laminated timber floor, but office buildings, commercial office buildings have a span that real estate folks want for leasing purposes of about 40 feet, 40 to 45 feet so you can’t use CLT unless you have intermediate columns,” says Applegath in a recent podcast conversation on the subject. “Well, that gets in the way of how offices are laid out and so tenants don’t want it. So, there’s this, personally, I think it looks great, but it’s an issue.”

The innovation was deceptively simple, though it was not without its challenges and years of extensive testing. Now, what has only occurred in simulations is finally coming to life in some of its final stages of laboratory testing before finally being implemented in a 105-story tower. However, DIALOG has not been alone in this endeavor. By partnering with construction firm EllisDon, the duo has been able to combine lofty aspirations and hard logistics into a winning combination.

For Applegath, that level of collaboration it exactly what’s needed in the world of construction today.

“There’s a wonderful book called Where Good Ideas Come From. And one of the things that was set out in it is that the history of innovation is almost 50/50 divided between individuals like Edison coming up with an idea versus groups of people coming up with an idea. I think the complexity of and if you’re talking about ideas like construction ideas and design, you’re going to have to be working with a sophisticated team.”

Tune into the Podcast to Find Out More!

In this episode of the DesignWell podcast, we’re going all in with the building sciences. Hear Applegath talk on his start as an architect, how he came to work with mass timber in buildings and how architectural firms can bring new building innovations from an idea to fruition by downloading the podcast, or watching it on Youtube.