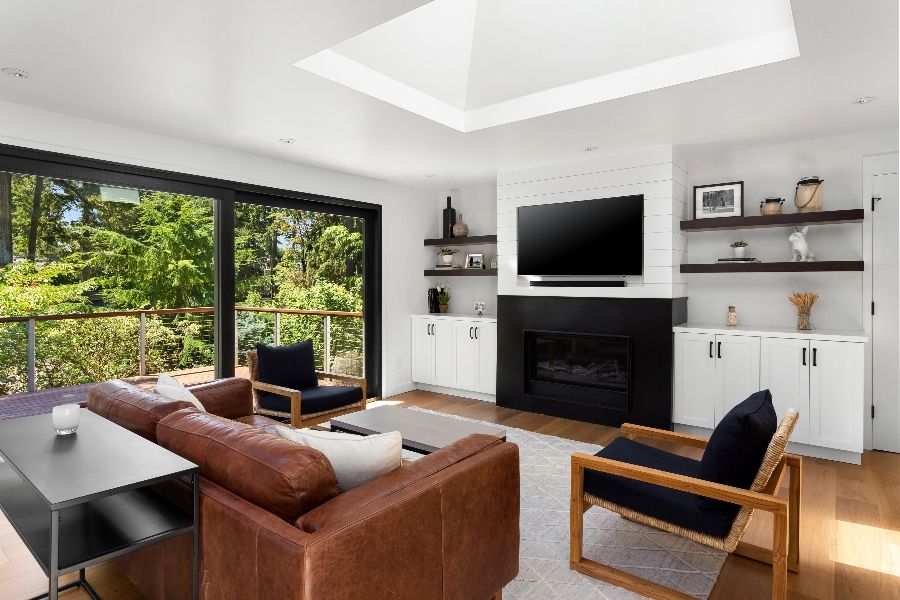 A Well-Placed Skylight Could Help with Home Heating, Study Says

A Well-Placed Skylight Could Help with Home Heating, Study Says

Winters can be rough on energy consumption. Behind passenger cars and trucking, heating a home, especially in the colder regions, is the largest energy sink in the United States. However, it turns out a well-placed skylight (or a few) may be able to provide enough heat throughout the day to significantly cut into heating costs in the home, even on a cloudy day.

Research from the University of Oregon found that there is enough solar radiation available to provide about one-third of residential heating needs nationwide. These calculations were based on homes having 100 square feet of skylights oriented towards the south.

And while the passive solar energy collected couldn’t take the place of a heating system in most climates, the researchers did find that it could cut heating costs. This is especially true during the spring and the fall, where the temperatures are less extreme and there is more sunlight than winter.

The Power of Passive Solar Heating

While not a full-blown replacement in many cases, passive solar heating is a powerful way to significantly cut into building emissions. It’s something that happens on a regular basis. Ever stand by a window and feel the warmth radiating off everything nearby? That’s passive solar heating, and it’s one of the main components of heating in passive house design. However, as it turns out, a house doesn’t need to be designed as a passive house to still benefit from this method of heating.

To understand the full potential of this type of heating, the researchers used home energy consumption data and paired it with satellite observations of solar radiation.

As it turns out, in Western Oregon and Washington (two states with some of the most overcast weather in the country) there’s enough solar radiation to provide about three megawatt hours of annual heating energy relief for homes with 10 square meters of well-positioned, unobscured skylights. This is enough to power the average U.S. home for more than three months in 2020.

According to an article by Oregon Public Broadcasting, a small number of organizations and builders currently promote passive solar to cut energy costs. But as the research buts into perspective how much energy is available, Scott Kosmecki, founder of Hinge Build Group and board member of Passive House Northwest, says designers and builders have to look beyond that.

“The issue has [been], and is still, how to effectively and affordably capture and control the [solar energy],” he said, which has potentially hampered the integration of these systems into building design in the past. As it turns out, skylights have never fully factored into the equation, with the cons seemingly outweighing the pros (namely overheating in the warmer months).

But the researchers found that skylights are ideal for capturing solar energy because of their orientation to the sun. It’s the angle of these skylights that allow this type of heat collection to be possible — especially in cloudy climates. The cloudier the climate, the closer to horizontal the skylights should be to catch the diffuse solar radiation.

Practically, these findings would be better applied in newer constructions, noted the researchers, as retrofits might prove to be cost-prohibitive. And while, at the individual level, these might not provide a significant climate impact, researchers believe the findings will open the way to better local policies.

“The city of Portland might say, ‘Oh yes, on the city scale, we could actually be gaining something like 400,000 megawatt hours. And now it’s worth our while to offer some kind of an incentive,’” said Alexandra Rempel.

Not only, she says, would that contribute to more sustainable space heating, but it would also considerably reduce strains on energy grids in the future.

The research was published in the Journal Renewable & Sustainable Energy Reviews