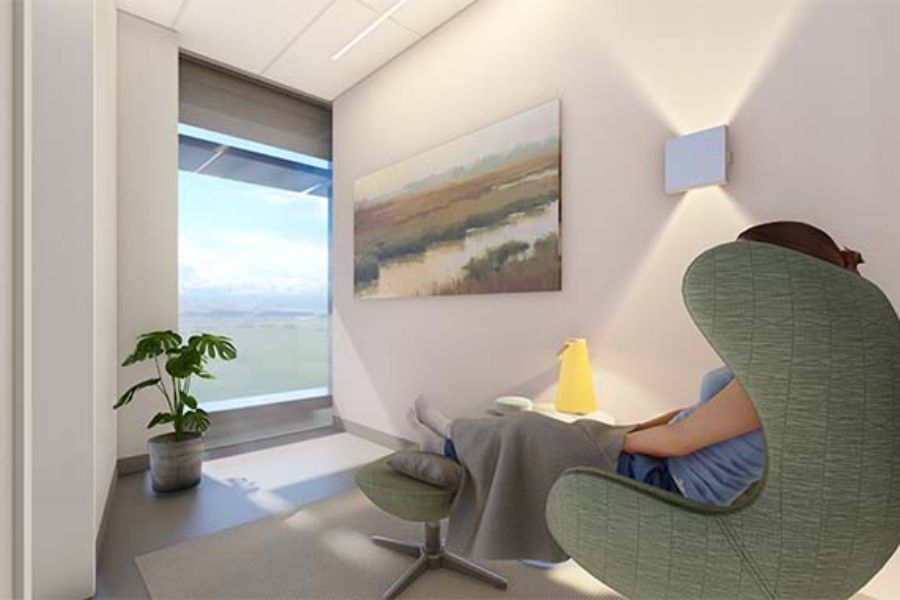 Lavender Rooms at UCI Medical Center-Irvine in Irvine, Calif., are located at the far end of the unit, with direct views of the adjacent San Joaquin Marsh nature preserve. The Lavender Rooms feature a neutral color palette, natural light, peaceful art, and a comfortable chair with pillows and a blanket to help lower stress levels.

Lavender Rooms at UCI Medical Center-Irvine in Irvine, Calif., are located at the far end of the unit, with direct views of the adjacent San Joaquin Marsh nature preserve. The Lavender Rooms feature a neutral color palette, natural light, peaceful art, and a comfortable chair with pillows and a blanket to help lower stress levels.

The pandemic has confirmed a greater need in supporting caregivers in the workplace, addressing both the physical and mental health needs within facility design. In the recent HERD Journal survey, 80% of respondents said that generating restorative spaces for staff is more important now than ever before. While prior efforts have included respite rooms, outdoor areas and offstage spaces for staff decompression and relaxation, another concept—the Lavender Room—is gaining renewed attention.

Part of the Code Lavender response protocol, Lavender Rooms exist as flexible spaces that are intended to support Code Lavender events, which could include holistic, therapeutic, and spiritual practices such as Reiki, meditation, aromatherapy, acupressure, or prayer. The goal of these spaces, and Code Lavender in general, is to focus on crisis intervention, rather than burnout prevention, to readily address a stressful event to avoid anxiety, PTSD and desensitization.

As part of the program, a staff member can also receive support from a Code Lavender team, which can consist of representatives from the spiritual-care and healing-services departments, as well as other hospital-based support services, including music therapy, wellness, ethics consultation, and art therapy.

At UCI Health’s new Medical Center-Irvine (UCIMC), scheduled to open in May 2025, nursing leadership prioritized the inclusion of Lavender Rooms as part of an enhanced staff environment. This initiative also includes team-based workspaces, staff-only terraces and levels, and amenity-laden lounges.

The UCIMC Lavender Rooms are located on every patient floor, away from the nurses’ station and in locations that offer full-height windows with unfettered views of the adjacent San Joaquin Marsh. The spaces are outfitted with comfortable finishes and flexible furniture, as well as massage chairs, music players, and other stress-relieving elements. As part of the protocol, staff members using a Code Lavender room will not be called back to work until they’re ready.

“In today’s healthcare environment, caregivers are experiencing high levels of mental and emotional stress, and we must be committed to creating work environments where caregivers feel supported and thrive,” Brooke Baldwin, chief nursing executive at UCI Health (Irvine, Calif.), told CO Architects during the project. “Lavender Rooms, as part of the safe and supportive staff environment of our new medical complex, provide a place where caregivers can go to decompress after particularly stressful events.”

For architects accepting the challenge of creating healing environments, Lavender Rooms are a viable option to help address the daily stressful events for caregivers in a way not previously considered.

Gina Chang, AIA, EDAC, is a Principal at CO Architects (Los Angeles), specializing in healthcare architecture. She can be reached at gchang@coarchitects.com.

Another version of this article originally appeared on our sister site Healthcare Design. 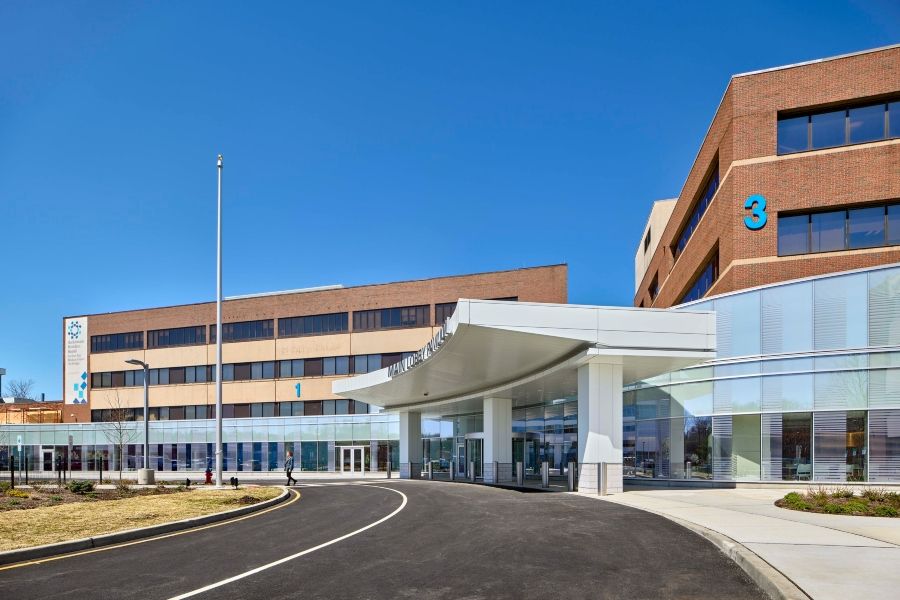 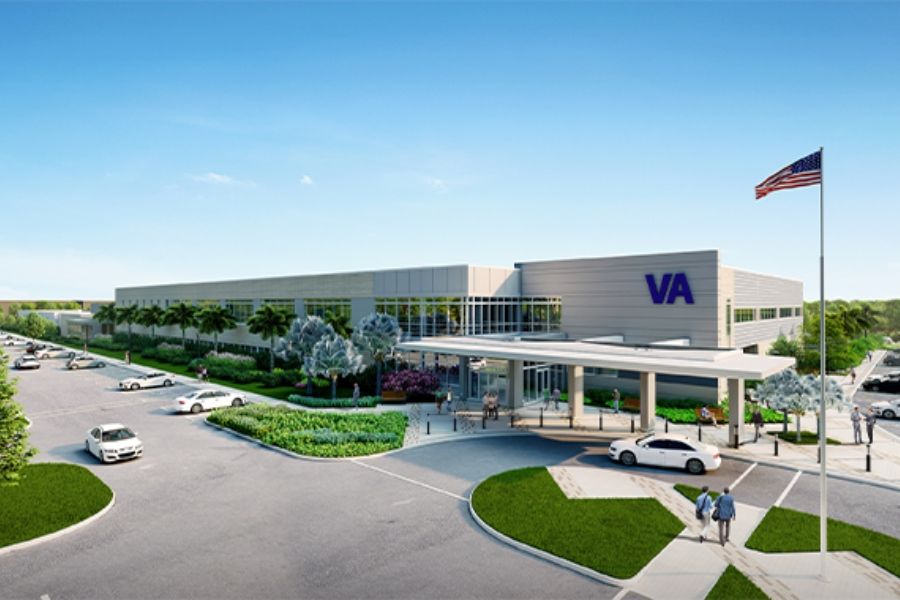 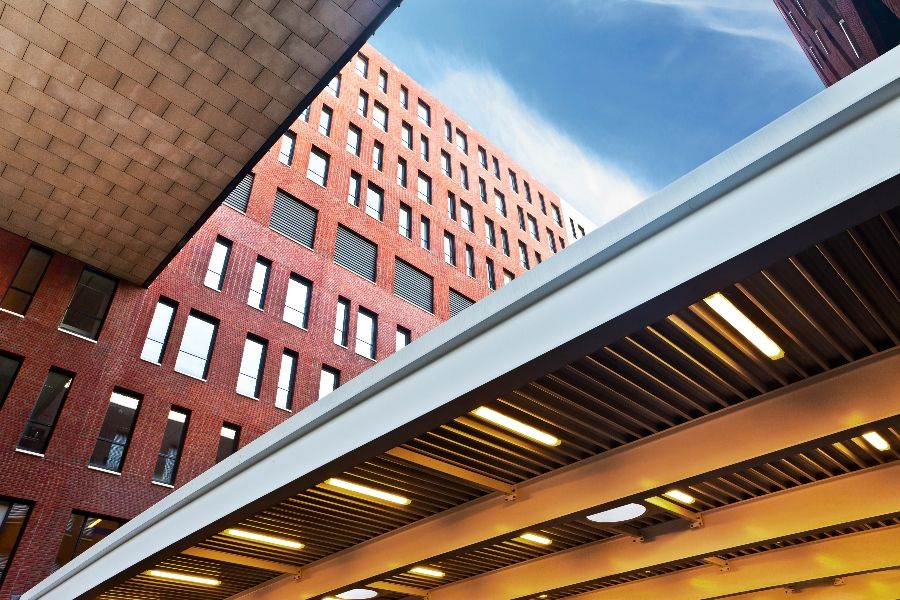 The healthcare principal of SmithGroup discusses what’s caught his eye in the world of healthcare design.