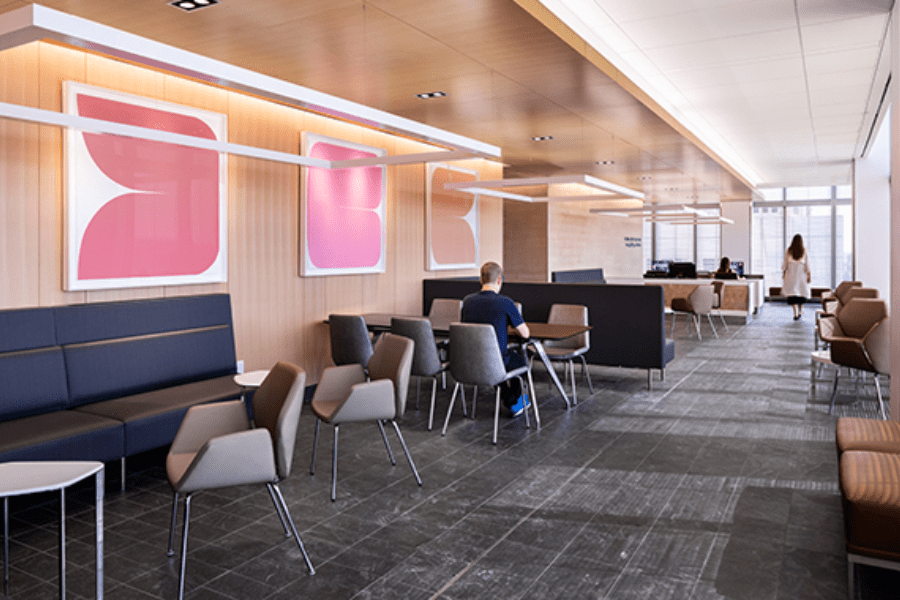 The Alexandra Cohen Hospital for Women and Newborns serves as a welcome addition to the Koch Center’s care continuum.
Words by: DesignWell staff • Photos by: James Ewing

The Alexandra Cohen Hospital for Women and Newborns serves as a welcome addition to the Koch Center’s care continuum.
Words by: DesignWell staff • Photos by: James Ewing

Spanning 246,500 gross square feet, the new Alexandra Cohen Hospital for Women and Newborns at the David H. Koch Center offers comprehensive care for mother and infant—before, during and after birth. However, its inclusion at the David H. Koch center wasn’t planned from the beginning. With the space originally being considered for more ambulatory care, it wasn’t until a neighboring facility sought to expand its women and newborn services that the women’s hospital came to be.

HOK (New York) worked as project architect while Ballinger (Philadelphia) served as medical architect and healthcare planner, the two of them collaborating equally on interior design alongside other firms that had previously worked on Koch Center projects.

Much like the existing design in the Koch Center, the women’s hospital offers an oasis from the urban environment while addressing the specific needs of its patients and families. “We choreographed the experience for all parties via flow mapping,” says Sara Ridenour, associate principal at Ballinger.

After arriving at the drop-off area—a quiet, internal avenue to avoid the stress of a busy city street—patients are greeted in the main lobby of the Koch Center and directed to dedicated elevators that stop only on floors 12 through 18. From there, staff will assist in guiding them from their arrival in the naturally lit sky lobby located in the corner of each floor to wherever they need to be brought.

That interconnectedness then follows through following birth as mothers are escorted to the postpartum unit through more dedicated elevators.

A focus on patient-centered care was among five “Departmental Visions and Goals for Maternity and NICU” outlined for the project by NewYork-Presbyterian, says Hillary Shaw, vice president of the Alexander Cohen Hospital for Woman and Newborns and the David H. Koch Center. Every patient room has three zones: a caregiver zone from the entrance to the bed; a patient zone at the headwall; and a family zone, typically set against the window.

Private areas for families were similarly prioritized. For example, every floor has a family lounge centrally located near the entrance for easy access. On the labor and delivery floor, there’s a partner’s lounge that offers a place for retreat when needed. The NICU floor houses a shower, laundry, and a sibling child life room. And the postpartum floors include multipurpose education rooms and a family dining room on the 16th floor where families can have a celebration dinner.

Meanwhile, the NICU rooms are arranged to operate as distinct neighborhoods, with each neighborhood having a dedicated entry point to eliminate travel through one neighborhood to get to another. In addition, an offstage corridor is provided for staff and supplies to reduce noise levels in the patient area and minimize conflicts with family flow.

Staff spaces are connected between a nurses’ station, a large team room and a dictation room for physicians in the back, which each being encased in glass to allow for natural light to flow in from the patient rooms. A sliding glass door between the spaces allows the team to open up the rooms for larger meetings.

The project team sought a timeless aesthetic to create spaces that won’t look outdated over the long term, says Christine Vandover, senior project interior designer at HOK. “It’s that timeless feel but also minimal and clean; it has a New York City quality,” she says.

Among the features are stone floors in the sky lobbies and wood-like materials used throughout the hospital, including a darker walnut-like wood in the labor and delivery rooms and a lighter ash in the postpartum rooms to distinguish the two areas as well as to mark a mother’s transition from one to the other.

Another key was using diverse lighting fixtures in different areas to create varying effects, such as linear light fixtures in labor and delivery rooms to provide needed brightness, while the postpartum rooms feature dimmable ceiling lights that have the feeling of a skylight.

The hospital’s art program is yet another defining element of the interior design, adding color and vibrancy to the predominantly muted color palette, which helps achieve a serene, calming environment, as do furnishings in rich but subdued blues and warm auburns, Vandover says.

“As part of the artwork selection for the Alexandra Cohen Hospital, we very intentionally invested in women artists,” Shaw adds, saying that the project team worked with Salon 94 to select the works that are displayed throughout every floor including patient rooms. “It’s beautiful, and it’s quite diverse,” Shaw says.

Much of the planning and design for the hospital was informed by feedback from focus groups and interviews with new mothers and their partners as well as hospitality research and virtual tours conducted in partnership with HOK’s hospitality designers.

“New parents want to feel cared for, comforted, and de-stressed in this special life moment,” says Vandover. “Hotels are designed with similar ideas in mind and focus on the total guest experience. That’s what we wanted to do here, to give the space that same feeling of specialness—a total guest experience.”

One of the insights learned was that giving patients and families autonomy of choice in how and where they spend their time helps to put people at ease, says Vandover. New parents also expressed a desire for comfort and control, which led to details like more seating in postpartum rooms and soft reading lights near patient beds.

A particular aha moment from the interviews was about “education and connectivity,” Vandover adds. “The moms have been in the room and they’re kind of looking forward to getting out and meeting some other new moms to connect with and share their experience.” In response, education rooms are located on each postpartum floor where moms can go to learn important new skills as well as socialize with others.

Many mothers also offered feedback on corridors, which are often used by patients to help ease labor. The women mentioned being bored when walking the halls, so the project team designed the corridor walls on the labor and delivery floors to feature acoustic panels in geometric shapes to help reduce noise and give mothers something of interest to look at. The flooring also features a pattern to help set walking goals for those in labor. 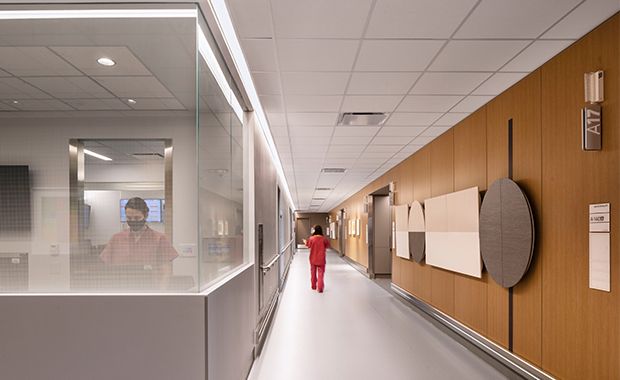 Working With the Feedback

Despite many of the communal spaces “sitting vacant for the time being” due to COVID-19, Shaw says, feedback on the hospitality approach has been positive. Specifically, patients are appreciative of the privacy, large rooms, art program, and abundant light incorporated throughout—insight that confirms the organization’s decision to fill the shell floors with the women’s hospital was the right one.

“[It’s] allowed us to offer the very best care for our patients in a bright and nurturing environment that prioritizes comfort, safety, and privacy,” Shaw says.

Another version of this article was previously published on Healthcare Design. 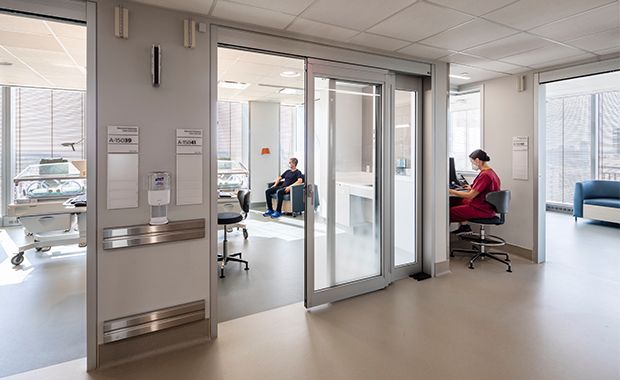 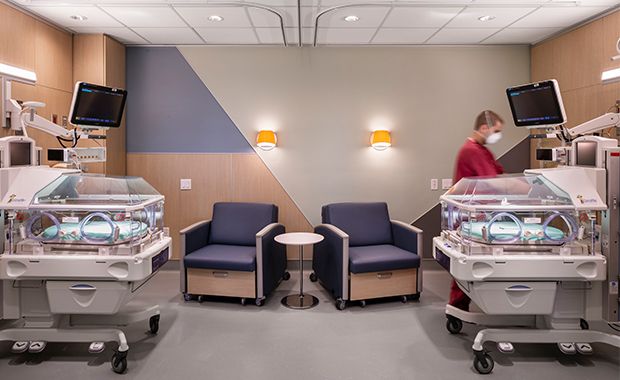 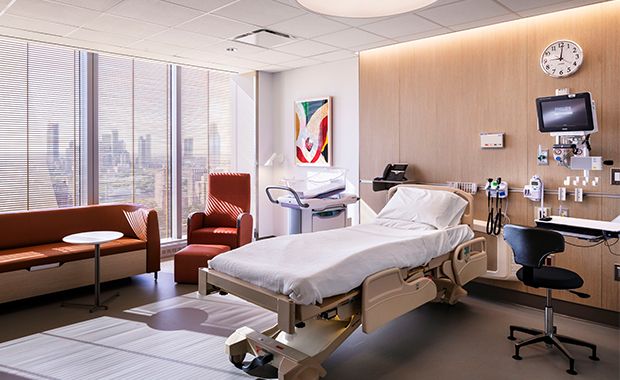 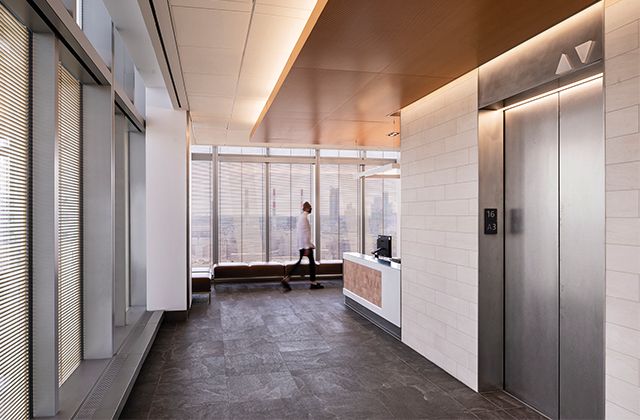 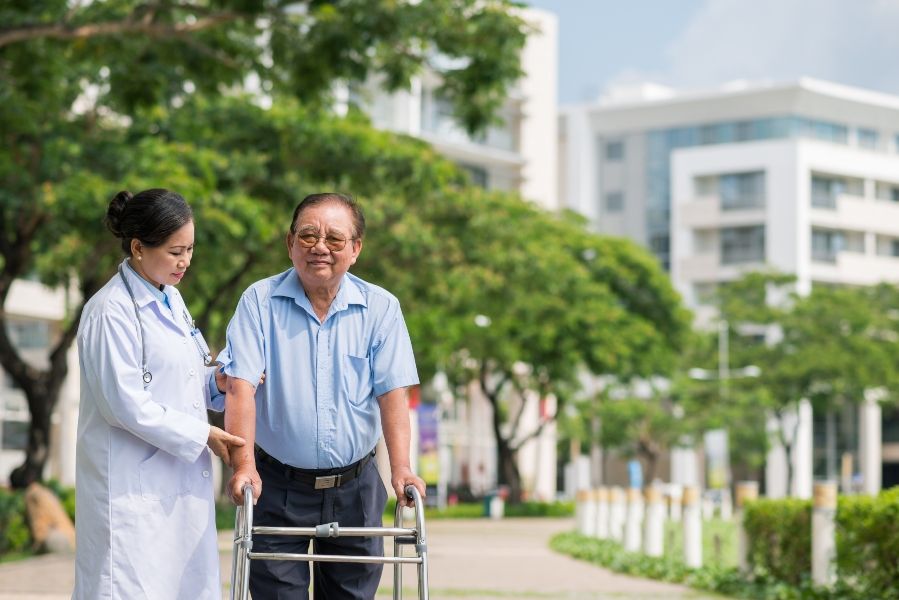 Despite being some of the biggest contributors to emissions, hospitals can do a lot to help mitigate their impact. 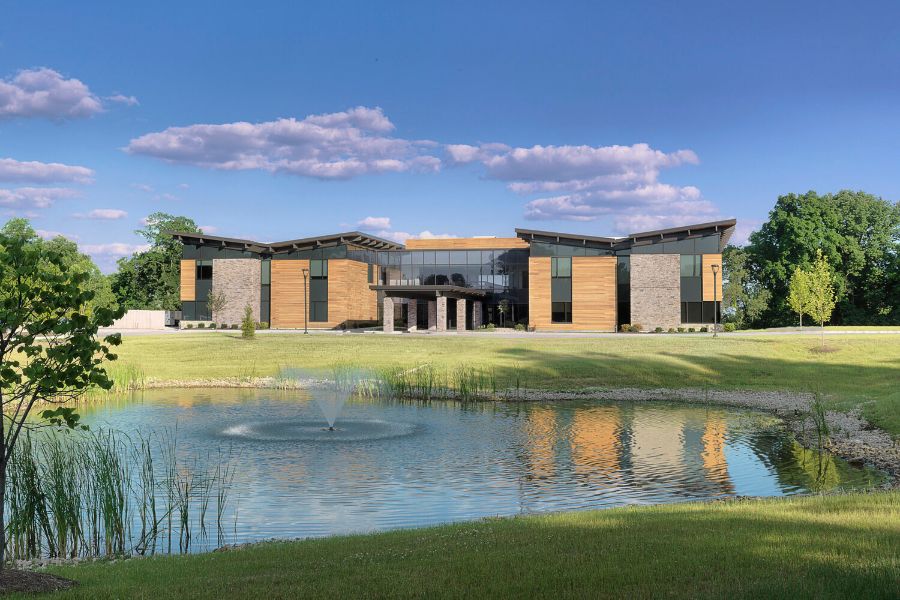 Light, warmth and community add an extra dimension of care to the recovery program at Harris House. 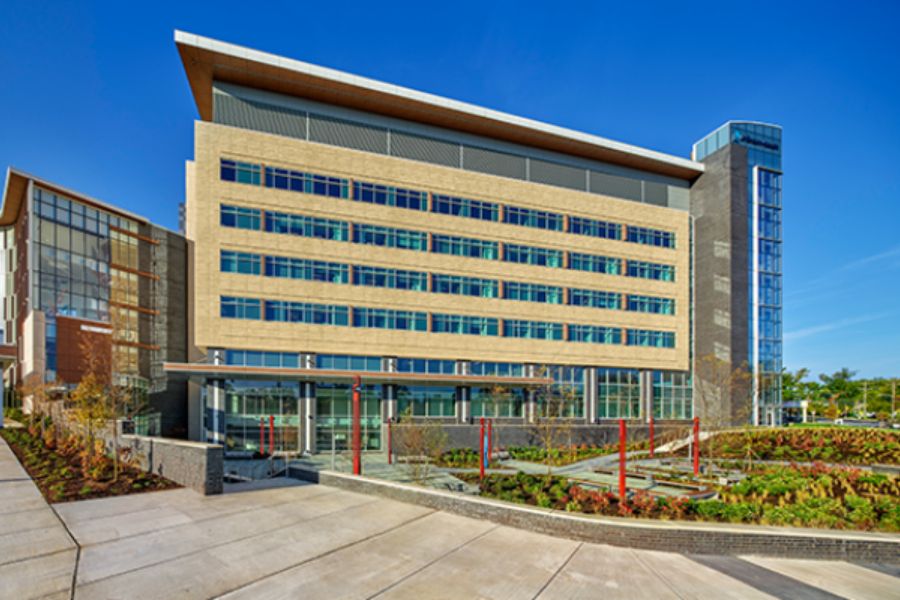 Biophilic choices provide a functioning aesthetic that caters to staff and patient goals. 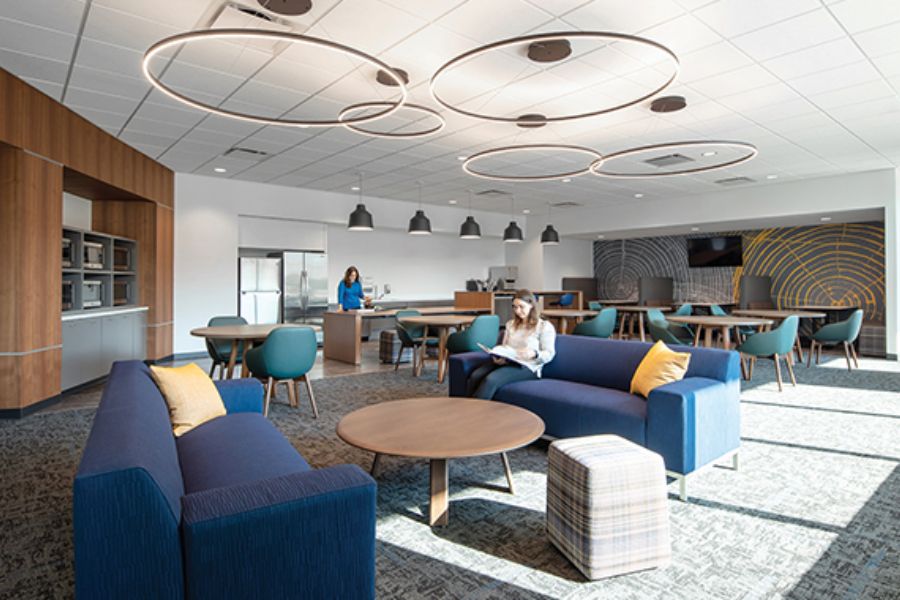 Amidst the most technical and efficient facilities, empathy continues to be a core tenant of design. 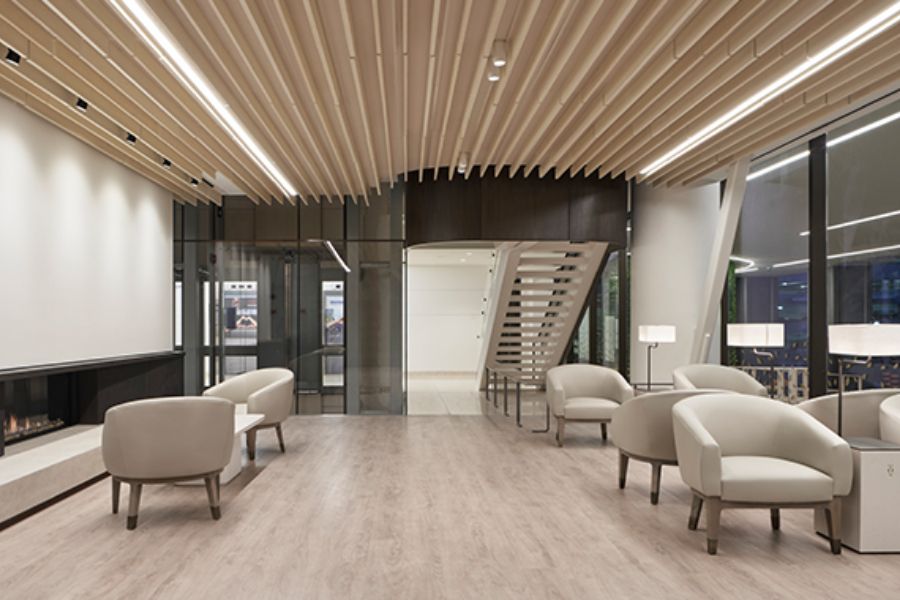 A space transformation project reimagines the patient as the partner of their own treatment.