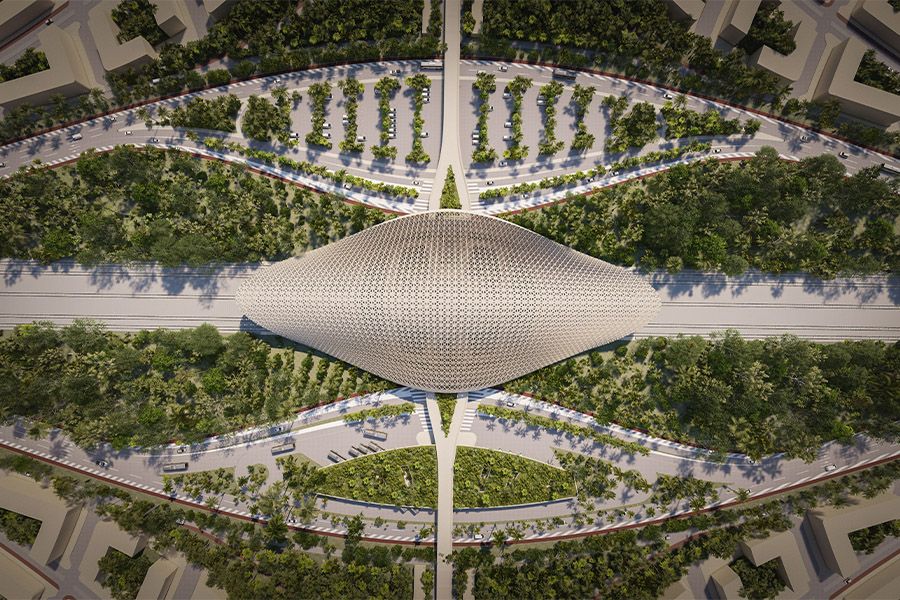 Designers and developers are coming together to make big ideas and green dreams a reality across the globe, and here, we’re looking at four eco-friendly urban developments that share a goal of leading the world towards a brighter future.

Just off the coast of Helsinki lies a cluster of islands dotted with thermal energy storage tanks and recreational wonders known as Hot Heart. The AI-operated thermal dynamo was conceived by New York- and Turin, Italy-based Carlo Ratti Associati, in collaboration with a team of consultants, and promises to fulfill Helsinki’s goal for carbon neutral heating by 2030.

“Our vision is that every citizen needs to be involved [in] fighting climate change. In this sense, the Hot Heart story is as much about technical infrastructure as it is about public space,” says founding partner and chairman Carlo Ratti, who also directs the MIT Senseable City Lab. 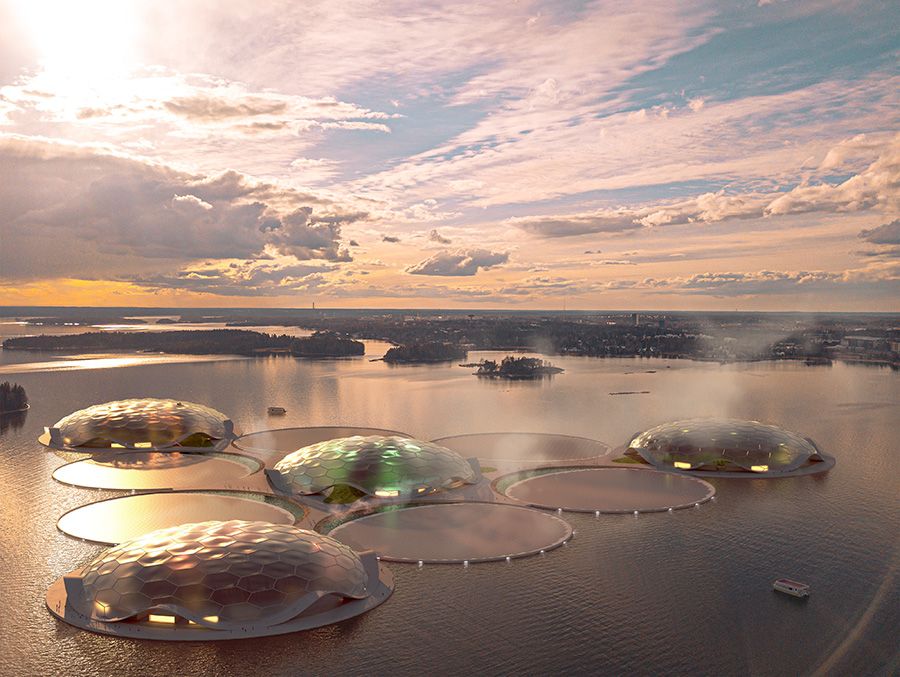 Hot Heart acts as “a huge battery, storing energy generated from renewable sources such as wind power and then releasing it” into Helsinki’s heat distribution channels as needed during the winter, Ratti says. “Imagine taking a boat to a tropical archipelago in the middle of the Baltic Sea, heated and lit all year-round. It would exhibit the potential of technology and sustainability and address our inner biophilia.”

Scheduled for wrap-up in the next five years, the River Ring development in New York is transforming a former fuel-oil storage site into a vibrant waterfront with huge, striking residential towers. Bjarke Ingels Group (BIG) is lending its sustainable design and urban planning know-how to the project, alongside developer Two Trees Management, with landscape architecture by James Corner Field Operations.

“We’re changing something from an industrial past into a greener future,” says BIG partner Kai-Uwe Bergmann. 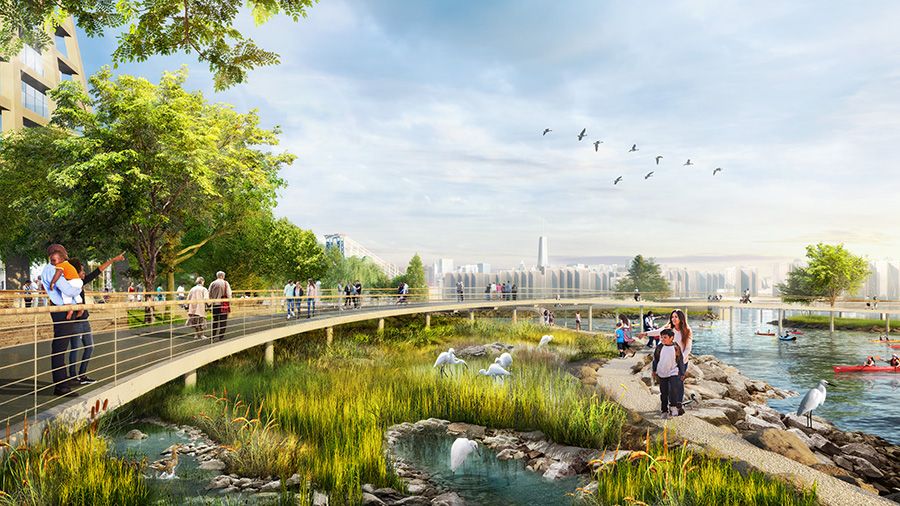 The namesake “ring” is a circular boardwalk connecting visitors to the beach, planned nature trails, and viewpoints fashioned from old oil-storage infrastructure, while the public park and beach will serve as a sort of barrier to rising sea levels. Potentially, the development could even help safeguard more than 500 inland properties from flooding during the next Hurricane Sandy-level storm.

Running like a 948-mile-long thread across Mexico’s Yucatán Peninsula, the Tren Maya railway is expected to be completed in 2023, with connections to some of the most iconic and idyllic locations of the region, including the historical city of Tulum.

The goal here, for Mexico City- and London-based Aidia Studio is developing a sustainably minded station that can handle the stresses of the local weather. Given Tulum’s extremely humid summers and rainy season, “the priority was to use passive techniques for cooling and ventilation without sacrificing natural light,” explains the practice’s cofounder and director Rolando Rodriguez-Leal of the decision to eschew mechanical systems. 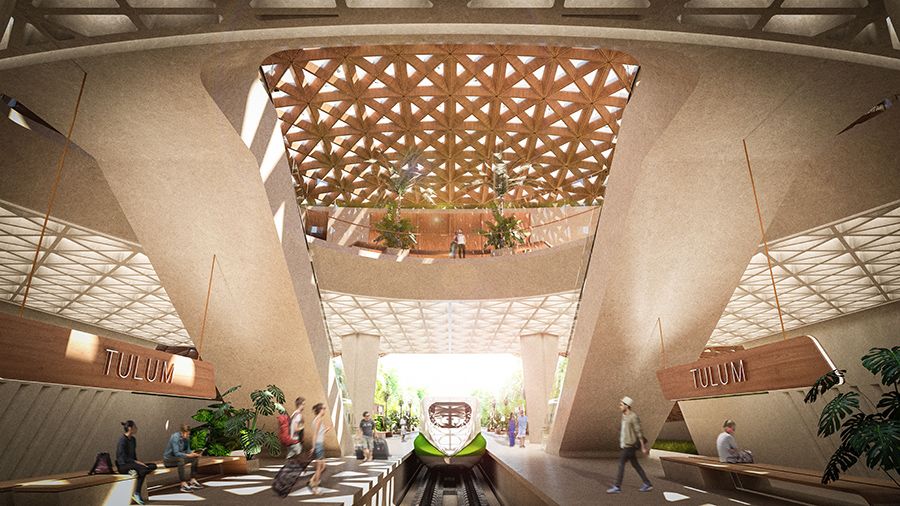 “The main hall is crowned by a lattice roof shell with openings on its ends to suck in the sea breeze, and glazed on the top to let light through.” Also striking are the building’s horizontal surfaces covered in limestone, a rock once embraced by the Mayan civilization that remains abundant in the region. The steel roof, which is clad with tinted glass fiber reinforced concrete (GFRC) panels, also mimics limestone.

On the underside, “laminated wood matches the warm tones of the jungle,” says Aidia Studio cofounder and director Natalia Wrzask, while the eye-shaped building footprint and public spaces stacked on multiple levels are designed to take up as little space as possible.

Ochre-colored sand, mangrove forests, and coral reefs abound in Hormuz, an island just off the coast of Iran in the Persian Gulf. Tehran-based ZAV Architects, the studio responsible for the island’s red cement-clad Rong Cultural Center, unveiled the Majara Residence community in 2020.

Golnaz Bahrami, partner and senior architect at ZAV, describes the sprawling village of 200 low-slung, domed structures as “scattered accommodations for middle-class visitors,” travelers who previously would have encountered a lack of such lodging options. While the affordable rammed earth units, awash in vivid but calming shades of red, blue, yellow, and green inside and out, aim to increase tourism beyond the dominant backpacker sector, the project is ultimately an example of a smart, urban development, underscoring a link between the environment and its inhabitants. 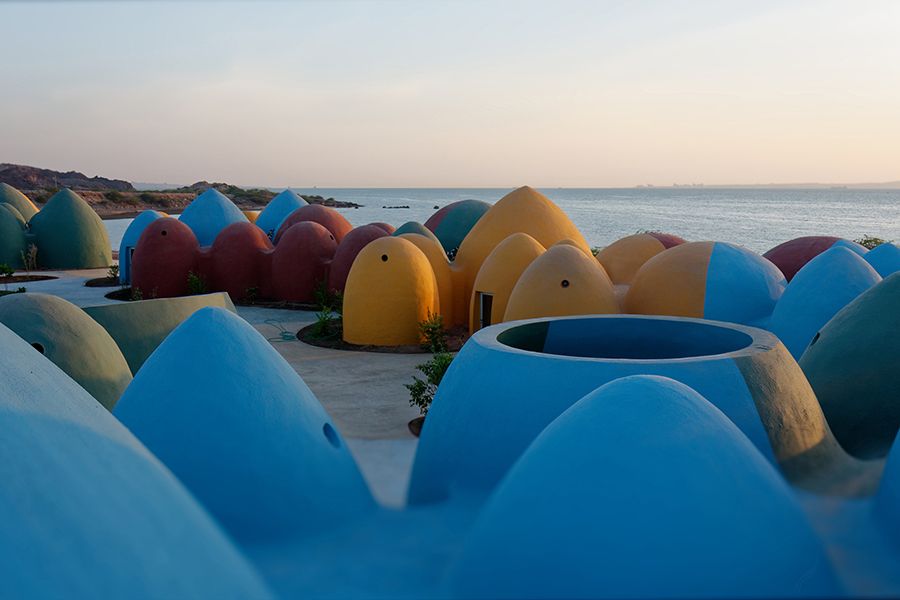 The site’s constellations of petite edifices flaunt different dome heights, mimicking the landscape’s forms and hues, together creating a sense of poetic continuity. Given the simplicity of the huts’ SuperAdobe construction, a process that included stacking bags of soil and sand dredged from the dock, local craftsmen and unskilled workers alike were hired to build them using local materials.

“Socioeconomic and geographic factors played a role in shaping the project, while national resources were frequently on the table,” says Bahrami, an approach that points the architecture of the Majara Residence “toward unexperienced realms.” 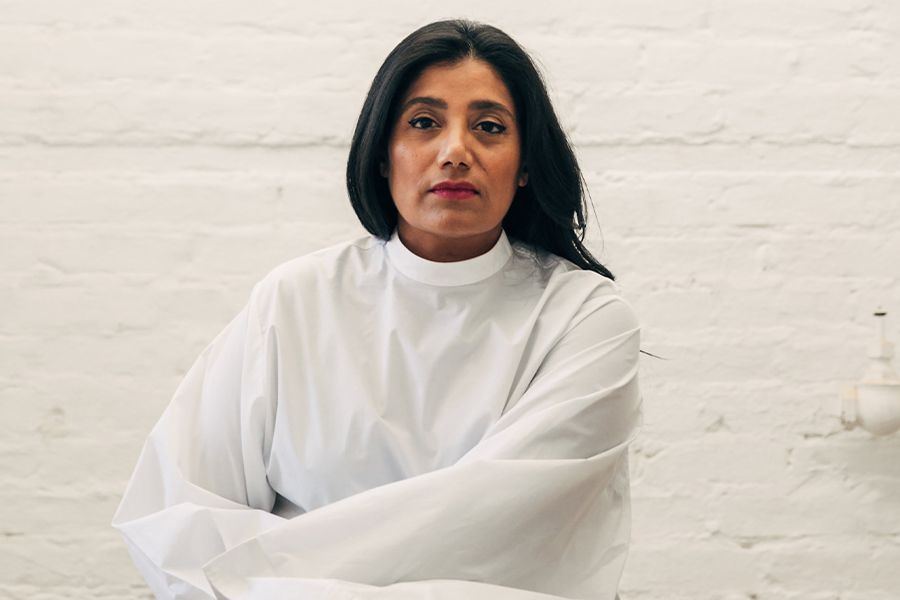 What began in a childhood home has evolved into a love affair with neuroscience and design. 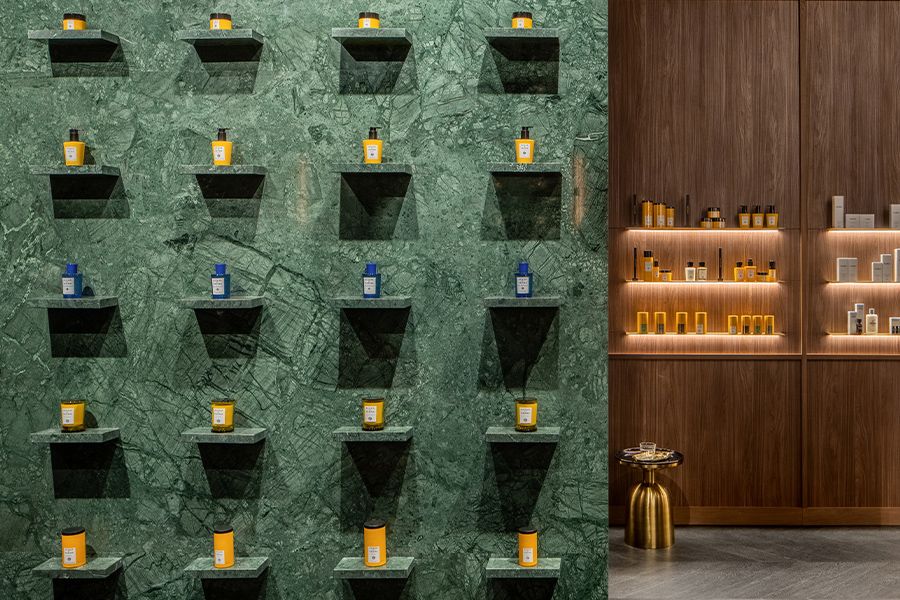 These 4 Wellness-Driven Spaces Deliver on Care and Comfort

Thoughtful craft draws out experiential self-care in these imaginative concepts. 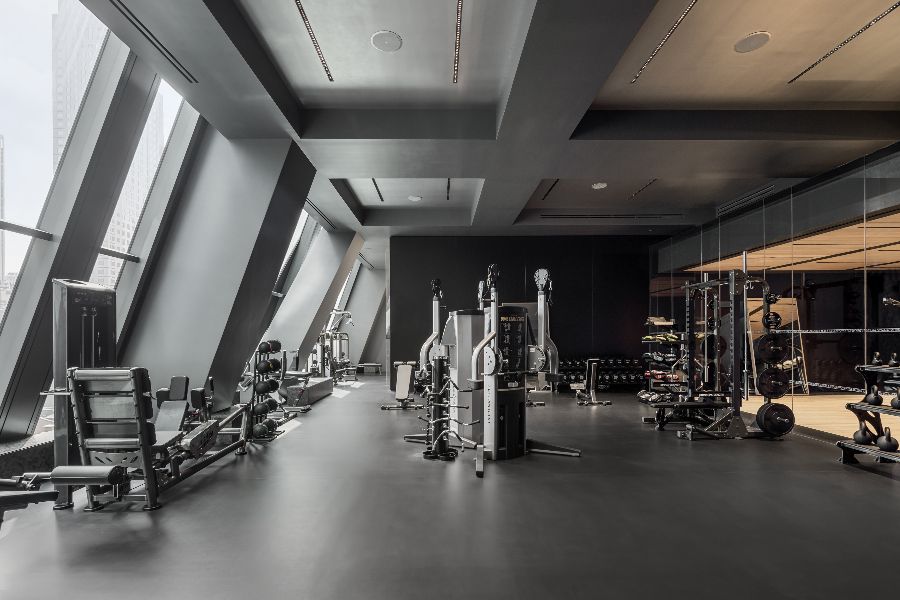 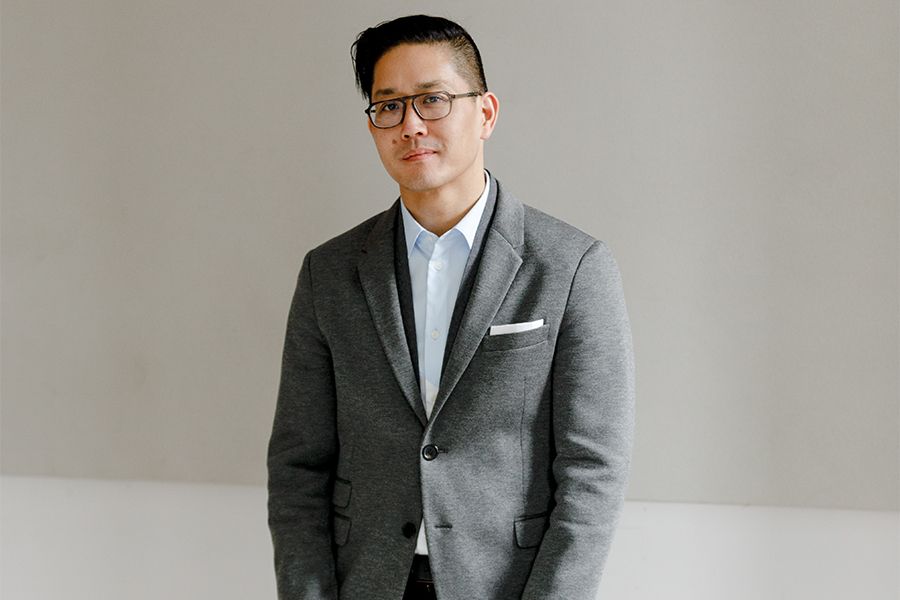 The Future of Infrastructure With Michael K. Chen 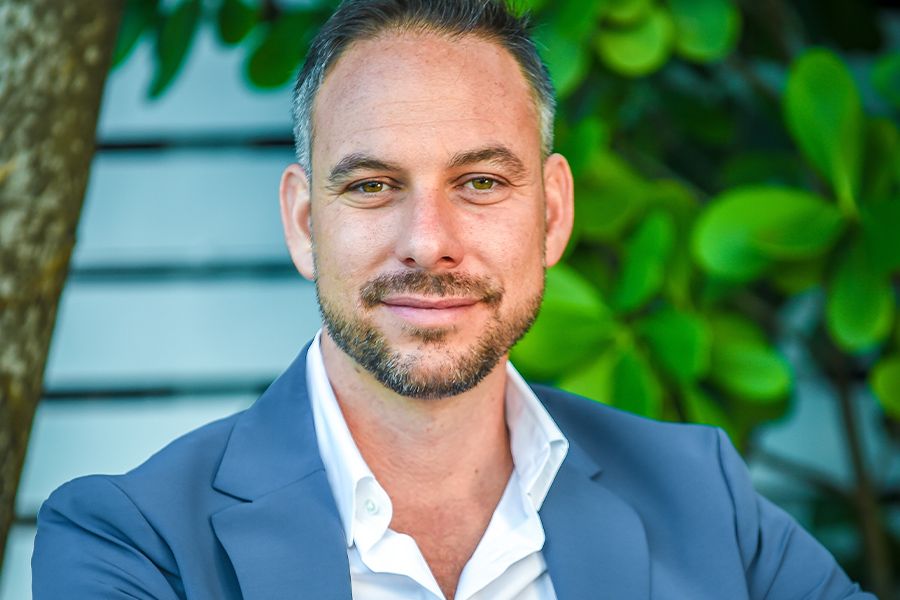